The first face-down creature spell you cast each turn costs less to cast.

Whenever a face-down creature enters the battlefield under your control, draw a card. 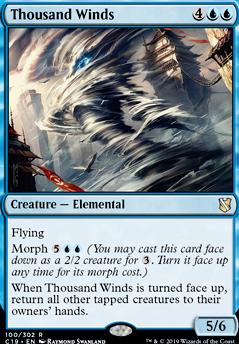 All that we see or seem
by JourneysEnd 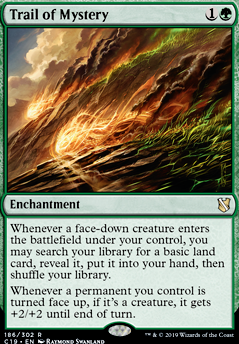 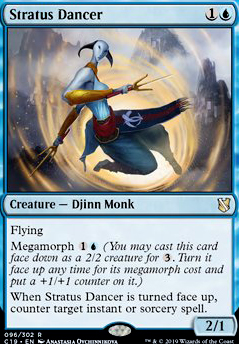 All that we see or seem
by JourneysEnd

Hi! You asked about my alter for Kadena, Slinking Sorcerer

Question for you! Do you have the source for that Kadena, Slinking Sorcerer

Gattison on Multiple Cards Not Appearing

It doesn't look like anybody tagged yeaGO yet, so there it is.

I'm also having the same issue as Gulaghar. 31 cards in my Kadena, Slinking Sorcerer deck are coming up as category "unknown," and the cards are not links to their own page, thus no hover-over-view.

Hello all! Here's our update for C19.

Anje is a value-generating commander that is an outlet for Worldgorger Dragon. She stands as a sidegrade to Xantcha, Sleeper Agent.

Atla has some decent potential to cheat in creatures, some interesting Mirror Entity combos, and built in boardwipe protection in colors that need it. She's limited by her color identity, but is powerful enough to compel competitive exploration and play.

A strong value engine and a third of the Elsha/Helm/Top style combo.

A very powerful cost reducer, albeit in colors that struggle for interaction. Tentatively placing him in Competitive.

His "reanimation" ability is a little too fairly costed between the discard and having to cast the creature. Rakdos limits interactivity and reanimator bombs. No obvious combos discovered yet.

In similarity to Grismold, we've re-evaluated Slimefoot as High Power.

No obvious combos, but is in a powerful color combination and lends to a lot of synergies.

Very narrow ability on top of a small pool of morphs.

Difficult to abuse ability, an unfortunate 'dies' trigger, and in lackluster colors.

Reasonably strong combat threat with Populate shenanigans, but solidly fair and slow to build up.

Combat slience is hard to abuse in these colors. Goading creatures can be quite disruptive.

Rayami, First of the Fallen

Very specific hate and a difficult to amass set of keywords.

One copy per turn on a narrow flashback interaction is difficult to abuse effectively.

Atla seems very weak. The ability to combo with the Stalactite and Altar is like any 3-card combo with one piece being a commander. Unless the combo pieces tutor for each other, are able to all be tutored by a separate card, or the commander can tutor for at least one of the pieces, or the combo is 1-3 mana entirely, the combo isn't reasonably viable on a general basis.

Elsha seems... kind of bad? It is a combo enabler with Top, and Flash, no reveal, only noncreature Future Sight seems okay, but a 5 mana creature variant that any Swords to Plowshares or counterspell can deal with seems weak. Maybe with enough protection, such as Silence type effects, the deck can just be a combo deck with Elsha as a piece, but as a Storm Engine, I doubt it will be able to reliably go off without too little protection. Maybe a midrange combo deck in the realms of tier 2-3.

K'rrik, Son of Yawgmoth is some high-tier mono-black Doomsday / Aetherflux Reservoir storm, you can look it up, it is really good, too good to explain here.

Anje Falkenrath can cycle through all madness cards for free really fast. I am sure there are some ways to abuse this. I don't know any off of the top of my head, but a Razaketh, the Foulblooded reanimator plan seems reasonable. Just run normal b/r tutors, a few reanimation spells, rakazeth, the combo you plan to use him with, and then lands and fill the rest with madness enablers and fast mana, I'd imagine you could do well with it, not entirely sure. Maybe there is a doomsday line as well, like another Grenzo.

Gerrard, Weatherlight Hero is apparently a good eggs commander, but I haven't seem any list. Ichor Wellspring , Krark-Clan Ironworks , etc do seem to have the proper synergies for a sweet list though.

Chainer, Nightmare Adept seems possibly decent. Buried Alive for Zealous Conscripts , Kiki-Jiki, Mirror Breaker , and Phyrexian Delver might be a thing, but I am not sure how much I am a fan of that. It may just be a decent value engine like Elsha.

Sevinne, the Chronoclasm could be reasonable with cards like Snapcaster Mage or Mission Briefing , Deep Analysis , and stuff like that, but is probably bad. Pariah's Shield is worth a mention here.

Pramikon, Sky Rampart is a reasonable include into some decks to fight Tymna the Weaver , kind of a Silent Arbiter effect, able to deal well with some blood pod decks in the meta, but isn't really a commander for cEDH, unless if Spark Double , Sakashima the Impostor , or Helm of the Host for no attacks at all seems useful.

I may go over the other cards more indepth, like the legendaries, but for now: