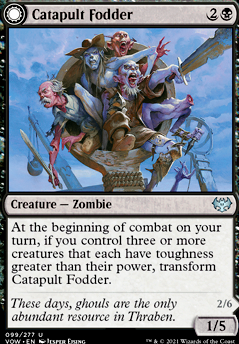 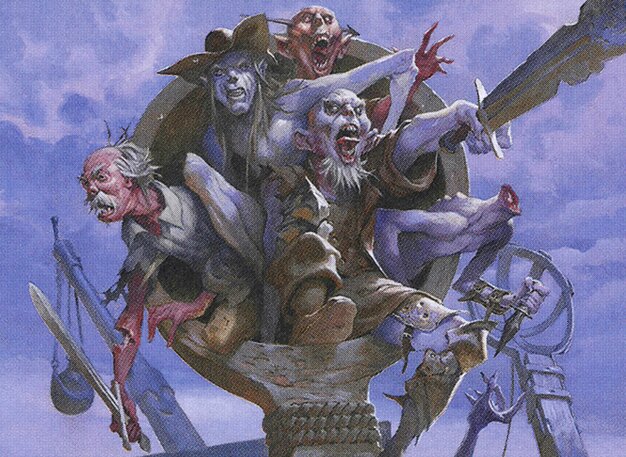 As soon as I saw Catapult Fodder Â  and Unhallowed Phalanx from Innistrad: Crimson Vow, I knew I had to build a deck around them. This janky monstrosity is the result.

My goal is to maintain a defensive position while pursuing one or more of the following strategies:

1) Transform Catapult Fodder Â  into Catapult Captain as early as turn 3. To do so, I run only creatures with greater toughness then power. Once I have a Capân, I can summon Unhallowed Phalanx, then eventually launch it at my opponentâs face for 13 damage.

2) Geralf, Visionary Stitcher bestows my Zombies with flying and can convert my 1/13 Phalanxes into 13/13 Zombie tokens.

3) Ancient Lumberknot turns each of my high-toughness creatures into powerhouses. If I control a Lumberknot and Geralf, my Phalanxes can fly and deal 13 damage.

4) Self-milling/discard via Larder Zombie, Otherworldly Gaze, Selhoff Entomber, and Undead Butler fill up my graveyard with creatures. Then I can cast Ghoulcaller's Harvest and generate as many Zombie tokens as possible.

5) Once I have a large Zombie horde, I kill as many as possible with The Meathook Massacre to drain my opponentâs life. My most important creatures are outside of the Massacreâs kill range. Dying Butlers return important creatures to my hand like Lumberknot and Phalanxes.

Jaspera Sentinel isnât a Zombie, but she helps me ramp into a Lumberknot or Phalanx.

3-color decks are difficult to make consistent without running Evolving Wilds, which I think is far too slow for this build. To increase speed, I am running dual-faced Pathways for each of the Sultai colors (Barkchannel Pathway Â , Darkbore Pathway Â , and Murkwater Pathway Â ), as well as additional dual lands (Deathcap Glade and Shipwreck Marsh).

Iâm also running a full playset of Agadeem's Awakening Â , which double as both a land and reanimation spell.

Bloodchief's Thirst is a cheap removal spell which covers both creatures and Walkers.

Crippling Fear is a back-up creature sweeper which is usually one-sided, since most of my creatures are Zombies.

Masked Vandal is a Zombie which has greater toughness than power and exiles any troublesome artifact or enchantment.

Test of Talents is a great counterspell which is a pseudo-Surgical Extraction. I can use it to counter my opponentâs graveyard hate and prevent my opponent from casting more copies of the same spell.

Turn the Earth is my choice of graveyard hate. It not only removes threats in my opponentâs graveyard, but also heals me and has flashback.

I specifically excluded the cards on the Maybeboard.

Champion of the Perished is awesome, but doesnât trigger Catapult Fodder Â , and I am running non-Zombies in this build.