Whenever Weatherlight deals combat damage to a player, look at the top five cards of your library. You may reveal a historic card from among them and put it into your hand. Put the rest on the bottom of your library in a random order. (Artifacts, legendaries, and Sagas are historic.)

The Golden Touch ($60)
by Quartzrockz 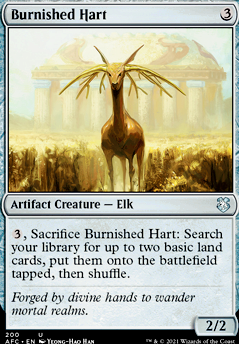 Dwarves is Offensive to Dwarves
by Cgarrett1990

Ruin Crab seems like an awesome commander--I've even built an entire EDH deck around it in the 99 (mono-blue, because how else).

Weatherlight is a dream build of mine, since I love colorless commander decks but don't care much for the current options of leaders. This being playable makes for an awesome deck. Now that I think about it... I should have a quick Rule 0 convo with my playgroup about that one ;)

Huatli, the Sun's Heart seems like she would be a cool Arcades, the Strategist alternative, with a bit of a lifegain subtheme making things interesting.

They be ships just flying ships :3

Rise of the Robots

i am trynig to bild a Contruct Tribal deck too. looks cool :D

jbgrv on The Pragmatist's Pet

Most of my commander decks were built for fun and casual play, and built with some lore aspect or tribe flavor. Sometimes, in order to make them more competitive, I have to replace some of the fun cards for stronger and better cards.

Recently I was sad when I had to replace Unwind with Mana Leak in my Jhoira, Weatherlight Captain deck. I know Unwind is bad counterspell, but it has Jhoira on it! I also had the Weatherlight and Jhoira's Familiar in this deck, but they had to make room for other more useful cards...

But I keep record of those removed pet cards and I have them all in a special box with intention to put them back for funny non-competitive games.

Anyways... Based on Eutropia the Twice-Favored

Equipped creature has +0/+1 and "Whenever an enchantment enters the battlefield under your control, scry 2."

If the equipped creature would die, you may reveal a card from your hand and the top of your library, if they are both enchantments, exile that creature instead. Transform Augury Bowls of Nylea and Thassa.

Eutropia, Seer of Trees and the Sea ()

At the beginning of your upkeep, name a card. Reveal the top card of your library, a card with the chosen name is revealed this way, you may put it into your hand.

Whenever an Island enters the battlefield under your control, you may reveal an enchantment from your hand, if you do, target creature gains flying until end of turn.

Whenever a Forest enters the battlefield under your control, you may reveal an enchantment from your hand, if you do, put a +1/+1 counter on target creature.

I'd like to see another weird equipment. Here, bowls are being equipped, so something in that vein of unconventional equipment.

So I tried to make a forum earlier and I just got the page with the Weatherlight and all of the Ornithopters being like "nah fuck you you can't do that". So help, please. Thanks.

Kogarashi on Are vehicles creature spells?

The short of it is that Weatherlight and other vehicles are only creatures when their Crew ability is used, and they can only be Crewed when on the battlefield, as permanents. On the stack, they do not have the creature type and thus are not creature spells (the same applies to all other zones; they are not creature cards).