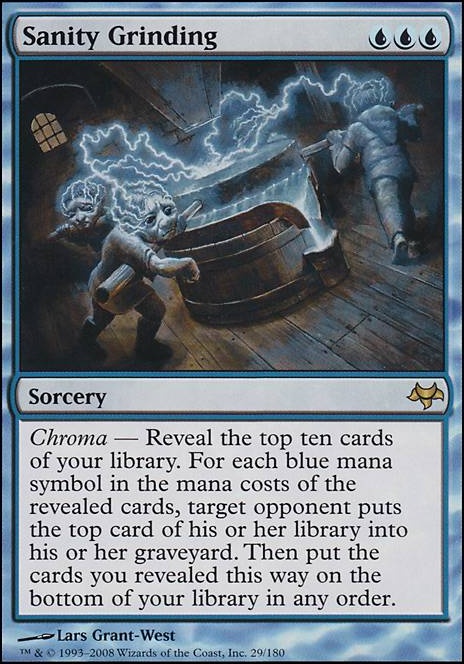 The Persistent Delinquent
by Alex_Argo

Magic, but without cards in your libraries
by Zuul

I'm trying to make the deck slightly more mill-by-tapping based, but I know that depending on Chronic Flooding is not going to go well. The things I have come up with so far for expanding on this category is Jace's Phantasm and Tome Scour; ideally I can make the mill go fast enough that I can reliably cast Visions of Beyond in it's Ancestral Recall mode. I want to get Sanity Grinding to work but I'm worried that the number of I will hit will be too small: The only way I would run it is if it is better than mill seven (i.e., better than Mind Sculpt).

Do you believe in fae after love?

Ohh !!! And Sanity Grinding is actually good. I'd also recommend a Snapcaster Mage if affordable. There is a cutie line of play with Field of Ruin and Archive Trap. Also Mesmeric Orb it won't hurt you that bad seeing as you are milling them more then you. Just run a few recursion cards and you're good to go.

shirouu- First, thank you for the uovote and thanks for considering my deck for a comeback!

Yeah, the "No" factor of this deck makes it pretty aggravating to play.
The real wallet sluggers here are:
Mesmeric Orb- These are nearly 40% of the deck's cost. Unfortunately, also nearly indespensible to the deck's mechanics. Doing so much of the heavy lifting, I'm afraid there isn't any comparable replacement for their long-game potency.

You may be able to replace these with some hard milling cards like Mind Sculpt, Tome Scour, Sanity Grinding, or Memory Erosion. All much cheaper than Orb, but will ultimately do less in the long run.

Oboro, Palace in the Clouds- this isn't necessary to the deck. In fact, it's in this list, but I don't actually have one for it in paper. My one copy is in my Esper Salt Mill. This list does quite well without it. You could use Halimar Depths for some deck fixing, and it would work with Deprive and Hedron Crab in a defensive position but still add fuel to your wincon.

Thing in the Ice  Flip- This is still in testing. With only 2 in the deck, it's not a crucial card. More of a backup wincon should I face a go-wide token or weenie deck. You could do AEtherize, or fill in with one more of each Unsummon and Vapor Snag. I've even been considering Boomerang, so I can return their lands as well.

On the low end of pricing, these cards are over 50% of the deck's cost. I'm not sure how competitive your meta is, but this will still be annoying in any capacity. If you're playing more casually, you can always do a casual mill like Bigger Bluer Eraserer, this deck features 2 cards, not legal in Modern: Whirlpool Rider and Accumulated Knowledge.

The other option to making this more effective with a budget, would be to add some more tempo. Mana Leaks, or other cheap disruption spells would simply buy you time to finish the job without the Orbs.

Hope this helps!! And I sincerely hope you get to use this and win with it. It's a lot of fun if you really like being the troll at the table!

Any more questions, or I can help, let me know!!
Go! Conquer!

One thing that you can add is Sphinx's Tutelage. It has card draw and also mills at the same time. Also if you go mostly blue Sanity Grinding may be good. Only problem is black diluting the effect.

I tried out the deck, and it seems to be a little short on land. Perhaps you could remove the two Darknesss to make room for them? If this deck is designed to win fast, then damage shouldn't an issue really. Maybe also board out the two Crypt Incursions for Mind Sculpt or Sanity Grinding.

Mill is traditionally mostly because of Glimpse the Unthinkable (down in price a little) and Mind Funeral, that being said you could probably build a budget mono deck more easily... In mono-blue you can use Tome Scour, Mind Sculpt, Sanity Grinding, Jace Beleren and Archive Trap, the last two are admittedly not that budget friendly.

Fraying Sanity is a fine card and will double the effectiveness of your mill spells, however Sphinx's Tutelage is often too slow to actually be effective. If you keep to then one of the things you want to add is an extraction effect; Extirpate, Surgical Extraction or at a push Haunting Echoes.

Thanks for the upvote, does anyone think I should add Sanity Grinding?