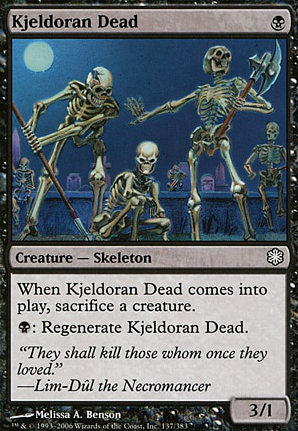 When Kjeldoran Dead enters the battlefield, sacrifice a creature.

I gotta BONE to pick with you!
by Lunar223 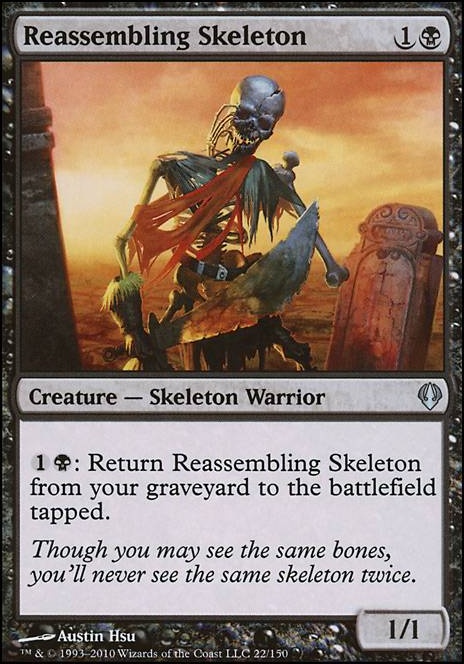 I think this is an okay guide for beginners designing simple cards with established abilities. Ultimately, I feel you miss a whole lot of the nuisance surrounding designing cards.

The most important rule, which you failed to mention, is knowing what format you are designing for. Your rules work fine for Standard and the unexciting cards that make up the filler in a precon deck or expansion set. They do not, however, lend themselves to creating new cards that would actually see play in Modern or the eternal formats.

Some of your rules simply do not track with reality. Take your card draw rule--you say a card should cost 1.5 mana, but it is well-established that gets you one card plus an additional effect (Opt being Wizards' pet example, but the for a card plus an advantage is so prevalent, the category has a specific word--cantrips).

You do not really address drawbacks, and how drawbacks can change the cost of the card (Daveslab2022 touched on this). Let's take a patently untrue statement in your post: "but we have never seen a 1-mana 3/1."

Drawbacks are an important card of card design, allowing Wizards to print strong cards below the curve. It is tricky to get the balancing on these right--and a number of powerful cards were created by Wizards' failure to balance.

I also think your post does a disservice as a guide by not discussing syntax. After not knowing how to cost cards, the biggest issue with custom cards are people's inability to write proper rules text.

When writing a custom ability, one should do a Gatherer search to find similarly-worded abilities that can be used as a template for whatever it is the custom card is trying to do. Not only will this make the card look more professional, it will reduce any abnormal rules issues that might come up as a result of poor wording and it might give a better idea of how the card should be costed.

what about the good ol' Kjeldoran Dead?

More Icy Manipulator's? Do the Drowned really have to go? Do I want Sanitarium Skeleton as a 1 drop for a second turn Kjeldoran Dead + Bone Picker even though it's pretty garbagey?

I've always been salty the stupid zombies overran Skeletons as go-to undead tribe in MtG, so to see the skeletal glory here warrants an auto +1! May I suggest Kjeldoran Dead? We used to run that a bit back in the happier days.

Game_of_Cones on I feel thrifty : )

In case anyone still listening:

Since I was kept waiting for more than an extra week to receive them, we will be in suspense for a few more days while I delay my gratification in opening Ice Pack #2....

Update: Added Aid from the Cowl, Deathreap Ritual, and Awakening Zone. Took the following out: Culling the Weak, To the Slaughter, & Kjeldoran Dead.