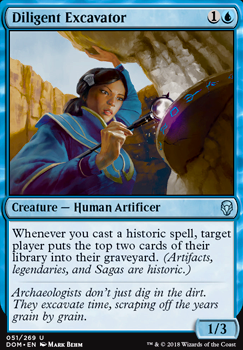 Whenever you cast a historic spell, target player puts the top two cards of their library into their graveyard. (Artifacts, legendaries, and Sagas are historic.)

Diligent Excavator occurrence in decks from the last year

Hey Daedalus19876, nice deck! I don't like very much combo, but Emry is one of my favorite Commanders from Throne of Eldraine, and this deck deserves an upvote.

With all the cards in the maindeck and the maybeboard, its difficult to do suggestions, but my suggestions are:

That are all my suggestions. I think that is more difficult do suggestions in edh decks that other formats like modern or standard, because there are more cards that can be playable, and the deck already has a great number of different cards with the main and the maybe (I think that more than 150).

I hope that at least some of my suggestions helped you :D

Banishing Knack targeting Battered Golem , who can bounce Ornithopter infinitely. From there, Genesis Chamber creates infinite Myr, and during your end step you activate Nevinyrral's Disk , causing an infinite number of Marionette Master âs triggers to kill everyone. Of course, you could also just use Diligent Excavator , but whatâs the fun in that?(;

I noticed this deck is fairly old now and a couple cards came out that could help improve this:

Fraying Sanity is an enchantment, at the end of each players turn, enchanted plkayer mills X where X is how many cards went into their graveyard this turn

Fleet Swallower is a creature that mills the top half of any player's deck when it attacks. regardless of whether it hits them or not

Patient Rebuilding at the start of your turn someone mills 3 and you draw extra cards if you mill lands, those draws will trigger Psychic Corrosion

Possibly Diligent Excavator does the same as Drowned Secrets but when you cast an artifact, legend, or saga although it might not neccessarily fit very well

ok, so you cast Release to the Wind , then in response you cast Naru Meha, Master Wizard copying Release, then you exile Naru with Release to the Wind then before the copy of Release that you made with Naru resolves, you cast Naru from the first Release to make another copy and then you repeat this infinitely. then the Drowned Secrets (or Diligent Excavator ) will see you casting Naru infinite times and mill your opponents that many times and you win! this requires seven mana or nine if you cast the Drowned Secrets on the same turn that you go off, so to reach that much you just need four or more lands, and Wilderness Reclamation on the field. you cast secrets and go to your endstep and float what mana you have left, then untap with reclamation and go through the combo with the mana you floated and from your now untapped lands. this can go off as soon as turn 4 if you cast Growth Spiral on turn two or three, as well as Drowned Secrets on turn two or three. the rest of the deck is mostly cantrips to get to the combo, I like jump start in this deck because it interacts very well with Wilderness Reclamation as you can cast one of the spells with jumpstart during your turn or something else, then you can untap and cast it again drawing a bunch of cards

I got this combo from MTGGOLDFISH, but the deck is of my making. I hope you enjoy!

This is an awesome deck!! I never would have thought of that combo, it's really cool and unique. Just wondering though about how the deck holds up before you get to the combo, or if you never happen to get it at all.

I would suggest probably more Judith, the Scourge Diva and Diligent Excavator , because they can win you the game outright, the others all take another turn or two to win. I feel like you might want to even scrap the other cards to benefit from the combo besides those, and just focus more on control/draw cards like more removal/possibly counterspells? I think at least some of that sideboard should be mainboard :P Also probably not but Precognitive Perception , i think it could be a powerful tool for helping you find your combo pieces. It's like a bigger, beefier Anticipate

multimedia: Good point. In a deck that doesn't use the graveyard Diligent Excavator can be pretty brutal though, so I left one copy. I went up to the four copies of Chromatic Lantern. And I don't have Treasure Map  Flip... so I put in two copies of Karn, Scion of Urza for the time being :D

Hey, you're welcome. I like the changes, might as well add the fourth copy of Lantern :) You basically want to draw it along with Sentry every game. Lantern or Sia looks like your best turn three plays.

Diligent Excavator is pretty risky to play in current Standard when both Golgari and Izzet (two of the best decks) are using the graveyard for card advantage. Find / Finality is in other fringe decks too because it's a powerful card, easy to splash for. Consider cutting Excavator for more artifacts for Sia? I suggest Treasure Map  Flip.

Well thank you for listing this it seems hard to find good combo list on websites. It is true that some of these combo are unplayable but the one with the Famished Paladin seems playable to me.

Well, since I don't want to do a post about it, I've found an other infinite combo. I'm not sure it is working but if it does well maybe you can add it to your list.

You can now repeat ad-Infinitum with Desecrated Tomb or other cards.

I also know that there is the combo with - Squee, the Immortal - Skirk Prospector - Goblin Warchief - Teshar, Ancestor's Apostle

But Teshar is in an other color making it harder to play i guess. And, if you want to infinite trigger something in an other color, I would prefer to trigger Diligent Excavator since it is cheaper and blue cards may permits you to Draw/Search more for the cards you want for the combo.