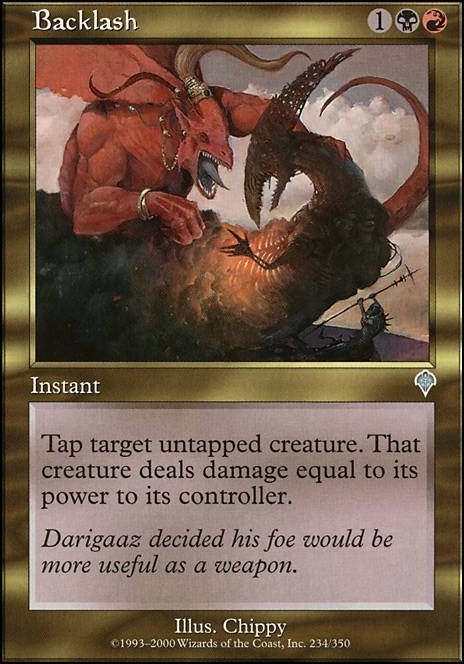 Tap target untapped creature. That creature deals damage equal to its power to its controller.

Backlash occurrence in decks from the last year

Queen Marchesa: Politics, Aikido, and the Monarchy
by monoblanco

Rakdos, Ruler of the Eldrazi
by DarkRequiem

ZendikariWol Thanks for the effort! I went through all the dualcolored cards myself and some of your suggestions used to be in the deck (or are in even right now) but it's always good to run through them again. Some of what you suggested isn't really in the spirit of the deck (my first restriction is no library search, making EDH games less boring due to constant shuffling) but stuff like Backlash could be very cool additions.

Older20 It's better use Second Sunrise or Faith's Reward .

MahBoi100 Like Jack the Ripper, let's go by parts:

The first three cards are removal spells, we are not trying to control the board, we are trying to conduct towards a result that benefits us.

I really like the idea of Varchild, you strengthens your opponents while protecting yourself.

Scheming is nice and dangerous at the same time.

Crown didn't create any value for your own.

Mathas attract to much attention.

Flash is CMC 6, that's too heavy, but it's a alternative to Word of Seizing , a card that saw a lot of play in this deck in the past.

You blowed my mind with Master Warcraft , excellent card for the aikido strategy.

Disharmony is like a fog of one creature or a removal spell, since you can get and block another attacking creature with it, both of the effects has better options in magic.

Jabari's Influence it's a alternative to Word of Seizing , a card that saw a lot of play in this deck in the past.

Soul Snare I like the reason behind the use of this card. Nice!

Boros Fury-Shield Man, this card is aewsome, it's better than Delirium and Backlash .

Encircling Fissure you usually don't have creatures to abuse of this, but it's a nice fog, can enter in the place of other.

Treacherous and mindclaw are heavy, cmc 5, and a shot in the dark.

Coveted act likes the monarch itself, a second monarch for 6 manas.

Shriveling Rot has an aikido angle to it but it's probably just clunkier than Rakdos Charm & Backlash since it requires removal, and people relying on infinitive sac combos can probably just stop for the turn. Still, it hasn't been mentioned so maybe someone can find a place for it.

Gleeock The point is that the deck uses the force of the opponent against her/him. With this "Pillow" you disable all the Aikido section, things like Backlash and Deflecting Palm becames a Lightning Bolt, without saying of Price of Progress and Gisela, Blade of Goldnight.

Quick update with some evolution of the deck, even though I need to update my decklist. I went to a LGS that I had never been to today. Was in a 4 player pod and over two games I faced Sidisi BUG Dredge Zombies, Food Chain Prossh, the same Jhoira Paradox Storm, the same Kambal Combo Control, and a janky Azusa Lanndfall deck. I had made a few changes before going, knowing that I would face storm combo and likely other combo in a competitive environment. I won both games I played. It took some serious threat assessment, some serious surgical excision of specific threats, and some changes in my deck list to log both wins.

Highlights of Game 1 were:

Highlights of Game 2 were:

I will update the decklist with some changes, but suffice it to say that I swung slightly stax against combo. Seemed to work pretty well.