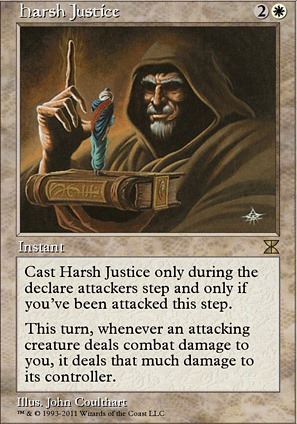 Cast Harsh Justice only during the declare attackers step and only if you've been attacked this step.

This turn, whenever an attacking creature deals combat damage to you, it deals that much damage to its controller. 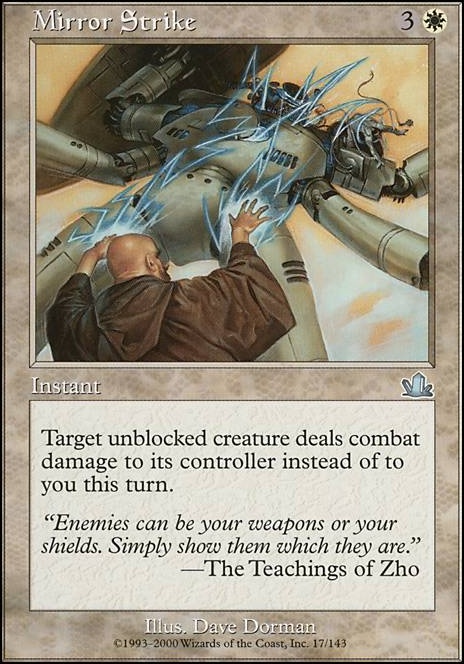 Scratch that, No Harsh Justice or Deflecting Palm lol I forgot Basandra affects her controler as well lol

Hexekk, Harsh Justice was in the very first draft of the deck. It was pretty good for a mid-game multi-creature attack. The problem I found was that it didn't prevent the damage, and it only outperformed Eye for an Eye if more than one creature attacked, and was useless against non-creature damage. I replaced it with Eye for an Eye, and then eventually took that out, too. It is a good card for sure, and can occasionally surprise someone for a win. Well worth considering for people trying vary things up with Aikido decks, and actually a pretty good mono-White Aikido card.

Bloodytrailz, I like your thought process. For finisher, I like Exsanguinate. It can just end a game. Acidic Soil is also a super solid card. I currently run it over Exsanguinate. I also have been thinking about Orzhov Advokist. It is a dangerous card to run, but it has a very interesting effect on the game. People are often happy to get a long term pump to their creature for redirecting an attack away from you. This also creates somewhat of an arms race amongst your opponents, as no one wants to be hit with a rapidly growing creature without defending themselves. Before you know it, your opponents are duking it out with ever growing creatures, leaving you to watch them beat each other. This is exactly the kind of situation that benefits an Aikido general. I also ran the Vow cycle early in the evolution of the deck. The problem was that just because they could't attack me doesn't mean that they can't block me. I found them to be a little problematic, and I think Orzhov Advokist is likely exactly the same.

Coward_Token, I think that Thief of Blood is to Solemnity for counters as Bojuka Bog is to Rest in Peace for graveyard hate, with the addition of having a game ending body, and having a much higher CMC, but basically doing nothing against Infect. I feel like the continuous effect is a much better option.

bradtheimpaler13, it was a custom alter that I commissioned by Sandreline Mousse. She is my favorite altered art artists. I plan to get my ABUR duals altered by her as well.

Nothing new to report for changes or considerations. I have't really dug through the Dominaria stuff, but haven't seen much of value for Queen Marchesa, and I haven't played much, and the last few games I have played were Archenemy: Bolas. That is a pretty fun diversion from EDH.

I found an amazing card that would benefit the akido aspect of this deck and add alot of power to it Harsh Justice a friend brought it up to me and thoight this was a perfect addition.

The Queen of Pillow Fights

Just to be clear, you want high impact cards, you just want them to be subtle, and not draw attention. Elesh Norn, Grand Cenobite, Gisela, Blade of Goldnight, Mogis, God of Slaughter, Assemble the Legion, Exquisite Blood/Sanguine Bond. They are all high impact cards. All of these get tons of attention. Expect them to bring attacks your way. No Mercy is a high impact card, but it has the opposite effect. Selfless Squire is also high impact, can cause a huge shift in the momentum of the game, and you often win shortly after, so the attention is short lived.

I also avoid cards that ask for revenge. Damnation, Merciless Executioner, and Custodi Lich all ask for retribution, and none end the game almost immediately, so most of the time people will have a chance to seek revenge. Sulfurous Blast often has a similar effect to Damnation, but it is very uncommon and doesn't come with a similar backlash because of the rare and elite attention grabbing nature of Damnation. Solitary Confinement has a similar effect to either (no longer fearing creatures) but doesn't demand retribution.

My last secret of my deck is that their attacks become my attacks. Early in the game, they fight while I hide. Everyone takes more damage than me. Then when one comes out ahead and I am the only opponent, I turn their advantages into a win, epitomized by Deflecting Palm, but also Batwing Brume, Rakdos Charm, or even Harsh Justice.

So combining these thoughts, you lay low and don;t draw attention, don't inhibit anyone's development, do your best to direct attacks away from you, let them overcommit, and when they do come your way, redirect their attacks back at them at the full force of their offense. The deck is ultimately created to play the players as much as play the game.