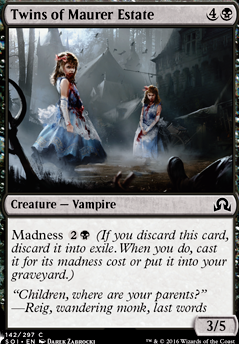 Reckless Wurm seems a valid option for this deck. Would consider removing Twins of Maurer Estate and Gorgon Recluse .

tardaniele: Hello! Glad you enjoy playing it. I'll give you my opinion on the cards you've mentioned.

Call the Bloodline: I love this as well, it has a lot of synergy with the deck. I used to run it in earlier versions but since I was playing Modern when I first built the deck, it was just too slow. I don't like removing Key to the City though, because when I play, I just dump the hand so fast and recurring card draw is just essential for this deck. But again that's my opinion.

Twins of Maurer Estate: This is just too awesome for the deck as well. The reason I was using Gifted Aetherborn instead is the lack of life-gain in the current deck, and he is a really good target for removal when you don't want your other important vampires being targeted. Should work exceptionally well with Call the Bloodline, as you mentioned, for those lifelink guys to help you out.

Doomfall: I loved this suggestion! I'll probably end up buying a set of four to test it out. It has no drawback in any time of the game, different from Lay Bare the Heart, which can be useless when your opponent is on top-deck mode. The only advantage this card has is the lower cmc cost, which is great for the consistency of opening hands and grabbing the information of your opponent's hand. I actually was running only 4 removals on the FNM (Grasp of Darkness) so I decided to include 4 more to have 8 total in the deck, and Doomfall seems like a great choice too.

Faith of the Devoted: This card seems pretty bad, I know, 3 cmc and no tempo at all. I just thought it would be a great inclusion to have more life gain to endure more on the game and to finish off games where you can't really hit with creatures (gotta hate that Torrential Gearhulk deck). You might be right in removing it for your version.

I have something I want you to consider when playing: your options when you're on topdeck mode. What are the discard choices when a unwanted Swamp pops up? You have Call the Bloodline, Stromkirk Condemned, Key to the City and Heir of Falkenrath  Flip. Depending on the board state, Faith of the Devoted can really come in handy to help you finish a game off. I'd probably always choose Key because more draw, is more discard triggers you can do per turn (that is considering you got rekt by a board clear lol - man I'm really traumatized by that Torrential Gearhulk deck).

Really nice deck! i love it!I built it, and I'm trying to run it with Twins of Maurer Estate instead of Gifted Aetherborn to have more madness cards and Call the Bloodline, removing 1 Key to the City and 2 Faith of the Devoted. I think the tokens could be helpful to sacrifice them for pariah and for the aristocrat. Maybe could be an idea also to change Lay Bare the Heart for Doomfall. What do you think?

Get rid of all copies of Twins of Maurer Estate, Reckless Racer, Ravenous Bloodseeker, Insolent Neonate, and Alms of the Vein, and put in another copy of each card you have only one of other than Chandra, Torch of Defiance, and put in a couple of Canyon Slough and Smoldering Marsh instead of basic land.