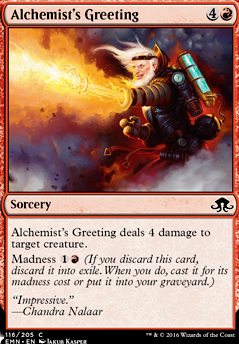 Anje Commands the Grave
by BeornAET 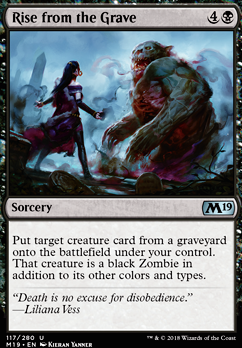 Galati on Help me help Tibalt

Why not make a Madness deck? Cards like Fiery Temper and Alchemist's Greeting cost very little when discarded.

I'd personally drop Lightning bolt's in favor of more Fiery Temper. The madness, with that much Wheeling, just makes sense.

I'd also like to suggest Alchemist's Greeting. possibly the other two Lightning bolts for this?

Another suggestion would be Empty the Pits and cards with delve, so you can empty your huge graveyard (maybe even Elixir of Immortality)

Fiery Temper, Alms of the Vein, Murderous Compulsion, Asylum Visitor and Alchemist's Greeting have great synergy with Neheb, the Worthy and Bloodrage Brawler :)

I like the idea, I also thought about the combination of Thermo-Alchemist, enchanted with Prophetic Ravings and a madness-source like Fiery Temper, Lightning Axe or Alchemist's Greeting myself - maybe this would also work in your deck.