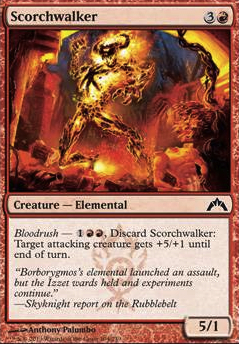 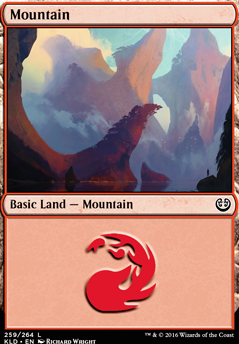 Hey! I homebrewed a deck VERY similar to this and have been working on it since they announced pioneer format.

you should check out the interaction between Thunderkin Awakener and Scorchwalker

Still need to check with official rulings if this is how this works out but if so its a pretty great combo!

Thanks for your suggestions! You are very thoughtful and helpful.

I like the effects offered by Khalni Garden and Dwarven Mine, but I'm very disinterested in the EtB Tapped part. They're fine for slow decks that don't care about turn 1 or 2 plays, but this deck needs to be really fast. If this deck's plan is to end the game on turn 3, Khalni garden could cost me an entire turn, and all it gains me is a plant token? Seems like a bad trade.

The difference, for me, between Rush of Vitality and Boon of Erebos, is the power-boost to Mana-cost ratio. Honestly, the card is more about pumping the Slaughtermaster for cheap than it is about saving him. I'm not a huge fan of the slaughtermaster being removed from combat either, but it's a lot better than him dying and me recasting him with summoning sickness and a a commander tax. But that's the niche case, mostly that card is just to boost his power. Rush of Vitality is only one power for two mana, which feels a lot worse in my hyper-aggressive "END THE GAME NOW" brain.

Phyresis is great. I kinda just don't like it?

Wicked Reward is actually a pretty terrible card in my build, it doesn't have any creatures. It has some cards that pretend to be creatures, like Rubblebelt Maaka and Faerie Macabre and Simian Spirit Guide , but none of those are actually creatures. This deck only ever has one creature on the field, ever.

I like the idea of Phytoburst more. I only realized that card existed a few days ago while throwing together a Syr Faren list, and I decided then to get a copy and put it in here. Screaming Fury is also worth considering. It'd be the top of my curve, but it's basically another Scorchwalker , and I like Scorchwalker. Mostly I like that it can't be countered, but 5 power for 3 mana is a pretty good deal.

Destructive Tampering feels not great in this build. Destroying artifacts is not a priority (I can get rid of artifacts by murdering their controller), and making things not block is a task I've accomplished more mana-efficiently with Trample.

Thanks again for the feedback! Stay tuned for Phytoburst and Screaming Fury edits. Eventually. (As I mention earlier, this deck is not something that I play anymore ever. It just sort of exists as a curious novelty, and editing it is not a huge priority forme.)

If you have problems with creatures, you can use cards with "bloodrush" as combat tricks, the chief being Viashino Shanktail which can lead to blow outs thanks to Flameblade Adept, or Hollow One being able to murder Wurmcoil Engine. (Rubblebelt Maaka, Scorchwalker are also worth consideration, and if you splash gree you get acess to Ghor-Clan Rampager.

Spitebellows gets around Stubborn Denial in decks, like Grixis death's shadow.

This is a fun looking red elemental tribal deck, but I'm surprised by the absence of Stigma Lasher (stops life-gain) and Nova Chaser (big hitter). Other elementals that might be useful are Hostility and Scorchwalker. You also want to be running Lightning Bolt in the main deck, the spell is just too efficient and Modern is a format about efficiency.

I hope my comment is of some help, have fun brewing your deck.

Since you want less cards in hand I would go for some bloodrush stuff like Wrecking Ogre or Scorchwalker. The double strike from the Ogre would make Neheb proc twice.