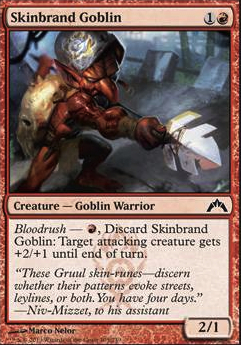 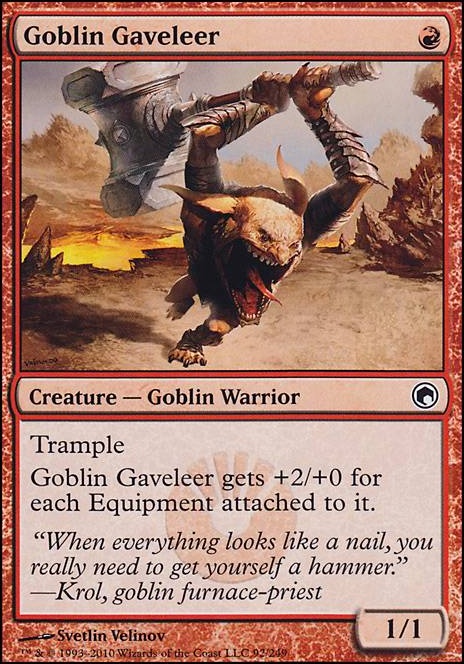 Party on Tin Street
by MyrTirant 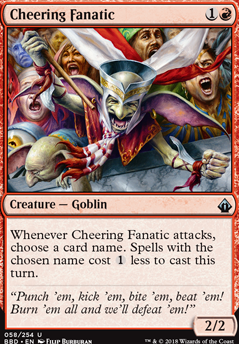 Ok, so I looked Lyzolda, the Blood Witch up during a game of magic using guild decks and from what I could understand it seems as though you can cast her pay ability from hand without having to actually play her - like the bloodrush ability on cards like Skinbrand Goblin . What's more is when I tried researching it further, it say's pay abilities can be played at any time as long as it doesn't have the tap icon too. I so badly want this to be real but I'm fairly positive it's not because this would make so much stuff super OP.

My guy, try some bloodrush. I actually have a hyper-casual version of this deck, though arguably no more casual than yours. Try Slaughterhorn, Rubblebelt Maaka, maybe Skinbrand Goblin, Ghor-Clan Rampager, Zhur-Taa Swine, and Rubblehulk. Note: rubblehulk's power/toughness works in all zones, not just the battlefield. If you go late enough in the game, that should absolutely be enough to get the job done.

How can I hold all these goblins!?!

Frenzied Goblin and Goblin Heelcutterlooks interesting, might test it.

Tuktuk the Explorer, Warren Instigator, Coat of Arms are all simply to slow. Goblin Wardriver is in the same boat, I had it in for a while, but replaced it.

Pyrewild Shaman, Skinbrand Goblin aren't good in this deck, though they do combo well with Zada, Hedron Grinder, but that would be a different deck to this one (fyi: Zada, Hedron Grinder + Goblin Grenade doesn't work. Sacrifice doesn't target, nor would it copy grenade).

And I am not a fan of Goblin Rabblemaster, as he always forces me to attack, evem when it's not advisable.

How can I hold all these goblins!?!

I found a bunch of cards that might interest you:

Frenzied Goblin has obvious uses, and is a great counter to slower decks, Goblin Heelcutter stops blockers, but also can trigger/retrigger Foundry Street Denizen and Reckless Bushwhacker, Goblin Rabblemaster is good for increasing the size and speed of your army, Goblin Wardriver for damage, Pyrewild Shaman or Skinbrand Goblin to boost existing goblins or play regularly, Tuktuk the Explorer alongside Goblin Grenade for a nice 4 mana combo, Warren Instigator for speed, Zada, Hedron Grinder + Goblin Grenade= death storm, and Coat of Arms, which is slow for this deck, but can give each goblin a major boost.

Sorry that the list is a little long, but I hope it helps! <3

I don't like Skinbrand Goblin whatsoever. I think removal would be better suited here like Lightning Bolt or Flame Slash, or even a Titan's Strength. Nice concept though, def put Ancient Grudge in the sideboard.