Discard Faerie Macabre: Remove up to two target cards in graveyards from the game.

Faerie Macabre occurrence in decks from the last year 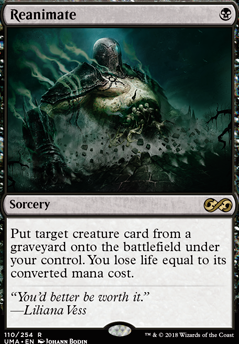 I read that post and I disagree with Flash being banned over Protean Hulk . And I get the reasoning for it - it would better if we didnât have to ban deck archetypes outright and Flash makes everything too consistent and fast and easy to hold up counter magic.

I would however argue that this makes Hulk decks easier to stop if you are running a blue deck, but harder to stop if you are running a non-blue deck. My best answers to stop Hulk is Red Elemental Blast , Pyroblast and Nevermore and if Flash isnât in the picture Iâm going to need to board more niche answers possibly over the red counter spells Iâd need for other blue decks just to impact hulk decks. Without Flash hulk players will only run a wider array of cards to get the combo going that can make the combo less interactive for non-blue decks. For example if the Hulk player wants to kill their Hulk with say Altar of Dementia thatâs fine, I run enough Disenchant effects to stop it before it gets to that point, but if they sac the Hulk with say Diabolic Intent Iâm boned. Having more ways to start the combo may be less consistent for Hulk decks, but its a major headache for people without all-purpose counter magic.

Iâve never liked Hulk decks for the longest time and if you had to ask me I would tell you they should have either banned Protean Hulk or at least ban Grand Abolisher , because I hate running cards like Faerie Macabre , Ghost-Lit Raider and Barbarian Ring just to interact around it. Now that Thassa's Oracle is out I donât think thereâs even much reason to use Grand Abolisher over how good the oracle makes the deck which terrifies me honestly. Removing Flash is a major setback I agree, but I canât help but feel that there will be cards printed in the future which will make the Hulk easy to cheat into play yet again. Not as easy as Flash , but enough for it to be a concern in the meta like it is now. My argument is unless non-blue decks get better answers that arenât incredibly niche I think Protean Hulk should get the ban hammer now. Whether Flash gets banned or not Iâve decided Iâm not going to even address combating this deck archetype anymore when deck-building, because it just makes my deck useless against every other cEDH deck Iâm up against if I have to run so many janky answers.

Hello again,
I know we had a similar conversation a while ago, but my LGS is now hosting a Commander league and I think this deck might be a good fit. There are no real Tier 1 or 2 cEDH decks in my meta. Most decks are focused to optimized, but there are also some semi-competitive decks in there.

Cards that are too expensive:

Other cuts:
Cards I though about running (instead):
One thing I am also worried about is people starting to play lots of graveyard hate. What would you advice to combat that?
Cheers

Mindcrank , Painter's Servant , Drown in the Loch , Nexus of Fate (so they cant mill you) Muddle the Mixture , Narset, Parter of Veils , Crypt Incursion (exiles titans that reshuffle for them) Faerie Macabre

Modern has a lot of answers for Planeswalkers and your deck feels like it is very dependent on them. I'd say your list is threat light, "normally" a faeries list runs one of two options, 1) on tribe: Vendilion Clique / Brazen Borrower and 2) a surprise finisher like Fallen Shinobi to end the game quickly.

A 3/3 elk will die to an Anger of the Gods or vanish to Settle the Wreckage at the same time as a 1/1 faerie, so you can't necessarily rely on going wide via Bitterblossom. Gilded Goose is inefficient in a format with Birds of Paradise in Standard or Pioneer, sure, but Modern also has Noble Hierarch for ramp. I'm also surprised by the lack of Cryptic Command which is a mainstay.

Your sideboard seems to be weighted against Tron variants, which may be a meta call, but it is ignoring Blood Moon, which your deck will struggle with as it stands. With only two copies of Surgical Extraction as grave hate I'm not sure how well you can play against Dredge/CrabVine either, oddly Faerie Macabre may be a better choice...

Your mana-curve is good and your deck looks well colour balanced, it just seems to lack faeries, for a faerie deck. Still good luck and have fun with your brew and I hope the comments above are of some help.

I think I'm good on the card-draw department. If I were to add in another draw effect, it would probably be Hunter's Prowess , but even then, it won't be unnecessary.

I know what you're getting at with the Spellbook , because a lot of the time I'll be drawing more cards than can fit in my hand, but most of the time, I don't find myself needing more than seven cards. Also it's a bit risky, because if someone kills your discard outlet, then suddenly you don't have any more ways to discard anything to fuel Hogaak.

You mention a couple cards to make Living Death better, and you do have a point that I should run at least one piece of graveyard hate, like Bojuka Bog , or maybe Faerie Macabre , but I don't think I should necessarily spend a lot of time building around one card in my deck. If playing Living Death in a certain scenario will be bad, then I'm just not going to play it.

I think you need a sideboard. Unless you don't intend on playing with one, I'll throw you some suggestions. Since you're on a budget, I'll consider that in my card choices too:

jaymc1130 So you're assessing the competitiveness level of his build based on cards that aren't even being widely used in the cEDH community? I get you're point about building too much around labman and I do agree with it for the most part. But he does have a Memory's Journey + Noxious Revival loop. I also don't think the cards you mentioned are as powerful as you make them out to be nor is this guy's deck as bad as you make it sound.

The cEDH community also isn't 'slow to catch up', they just understand that there are better options like Faerie Macabre which is harder to counter and can be cast at instant speed. The said card allows you to take out threats the moment become threats. Anyways, I wouldn't want to hijack the discussion of this list so i'll head over to yours. I hope you guys can take a quick look at my deck too. I always welcome constructive cr