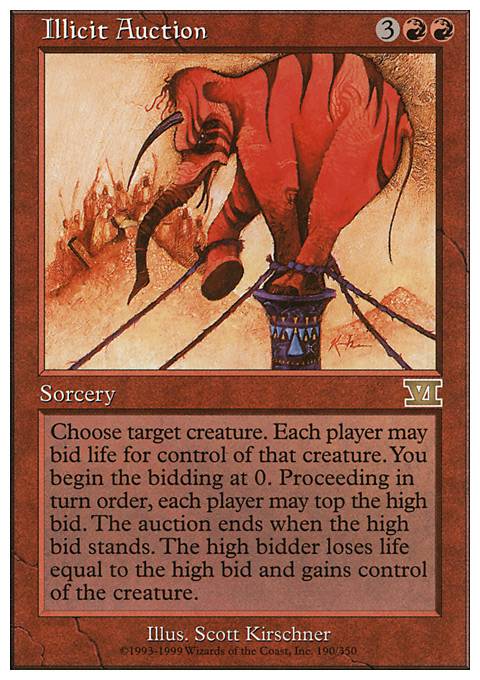 Illicit Auction occurrence in decks from the last year

Stick and Carrot
by holker

Wargles on Looking for cards to fit â¦

So I've been building a demon tribal deck around a "deal with the devil" theme (its rakdos) I think I have enough demons and a good idea of what edits to make on that front, but I'm lacking in cards that are deal-like. Some examples of such cards would be Tempt with Vengeance , Illicit Auction and Curse of Opulence . Ideally cards that suggest some kind of exchange or game that have some fun and interactive effects.

I'm looking forward to playing politics, as well as bringing home the fact that attacking me is perilous, even with little to no board presence. I'm also really happy that I finally found a place for my pet card, Illicit Auction ! ^_^

Love these types of decks! +1

A suggestion I have might be to cut the Primal Surge since you run so many spells. I would put in something like Timesifter or Illicit Auction for the additional chaos.

I have a deck of this nature that you could look at for ideas We All Need a Little Chaos..., and looking online for specifically chaos cards will usually yield some fun results. Hope you the best in your quest to create randomness in a formate of infinite combos and turn 3 wins!

Illicit Auction is pretty similar but you'd lose out on hipster points cutting it. I personally find Blood Tyrant & Skyline Despot to be pretty underwhelming relative to their cost but you might have contradictory experiences.

Also, Psychic Battle is another SSS occupier with a choice aspect to it, although it might be too annoyingly chaotic.