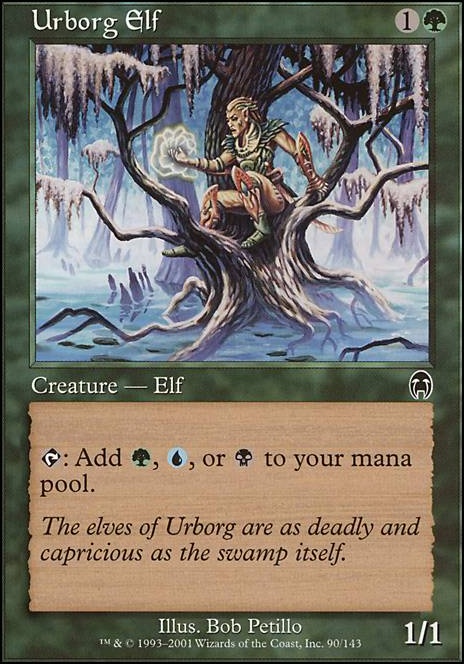 Muldrotha the reanimator
by Baddad936

Oops! Idk how Vampiric Tutor found its way into the sideboard, thatâll be main boarded post haste. Thanks for pointing that out.

I guess you are right about Entomb; Iâll remove that in favor of Moxes and Tutors. The same goes for Urborg Elf.

In playtesting Iâve found Exploration super useful though. Iâll keep it in for now; with the dual lands and Moxes I donât think having it will detract. If it does, I can always swap it out down the road.

Thanks a bunch for all these suggestions, I think this is already more streamlined and efficient. Iâll make the changes soon!

See this is why itâs good to ask for advice! Let me go through your suggestions one by one.

1) Iâm not sure, so correct me if Iâm wrong, but I donât think I could sacrifice Dark Depths to itself via Exploration to trigger Marit Lage. Iâm leaning toward No because the card specifies âWhen Dark Depths has no ice counters on it, sacrifice it.â Even though itâs a card subject to the Legendary rule, I think theyâd both enter the battlefield with ice counters. Again, I could be wrong (and if I am, please let me know!). But I think youâre right about not running Exploration anyway.

2) As for Entomb, I included that as a tutor to acquire either Dark Depths or Thespian's Stage. Then I can grab them from the graveyard using Grim Discovery. In a pinch it could also locate and grab any of the creatures with the same process. Iâm leaning toward keeping them in, at least until further playtesting.

3) Makes sense about removing Spoils of the Vault too; I already have the superior Demonic Consultation so I suppose I can cut it in favor of Ancestral Recall (I keep forgetting that card exists. What irony XD)

4) Is Crop Rotation really all that useful? I guess I just canât see the value. Since it costs a green even if I use it to sacrifice the land i just tapped to cast it, have I really gained an advantage? My mind canât quite put together itâs usefulness. Help me understand better how it works or why itâs so good.

5) As much as Iâd love to include more copies of Vampiric Tutor, itâs restricted:/ I could add Imperial Seal, that sounds like a plus. Grim Tutor sounds too slow (plus I donât own a copy).

6) I think the mana producing creature Urborg Elf is really good, I donât know why I should remove it here. It can chump block and help pay for the means to find and assemble my pieces for Marit Lage. Is it really bad to have the elf?

SP3CTR3_chelts on Will there Ever Be a â¦

They really do, the lower mana cost generally means you can win a turn earlier in combo decks and be that much more aggressive in other decks. In addition the exalted enables threats that would not normally pressure a player to pressure there lifetotal especially in duplicats.

for example in my deck my turn 2 win requires a Noble Hierarch or a Birds of Paradise .( Leyline of Abundance on the battlefield to start turn 1 land into NH/BoP turn 2 land into Freed from the Real

Having said that Noble Hierarch is not needed to make a fun playable deck. However, I would recommend Arbor Elf over Urborg Elf as he can still untapp breeding pools and the reduced mana cost is very important.

DemonDragonJ on Will there Ever Be a â¦

SP3CTR3_chelts, why is Noble Hierarch so much more expensive than is Urborg Elf ? Do exalted and its lower mana cost really make that much of a difference?

SP3CTR3_chelts on Will there Ever Be a â¦

U/G that taps for mana:

I'm sure there are more

Urborg Elf is decent if you want another mana dork.

I'm not sure Expedition Map is worth it in this deck. You could just play 4 Terramorphic Expanse and save net 2 mana per use? Either that or add 1 Urborg, Tomb of Yawgmoth for a worthwhile search. Llanowar Dead would stay on the board unlike Urborg Elf (the elf would die before getting a counter). Devoted Druid could also be fun. There's not much room to work with in this deck. I can't think of better alternative cards. That said, a deck that is fully optimized toward its strategy isn't automatically good enough for our meta. Seems strong with the right hand. Do you think it will be consistent enough?

What about Kodama's Reach and Cultivate ? Also, creatures like Yavimaya Elder , Urborg Elf etc. etc. Is this a full list, or are you still adding cards to it? Great list.