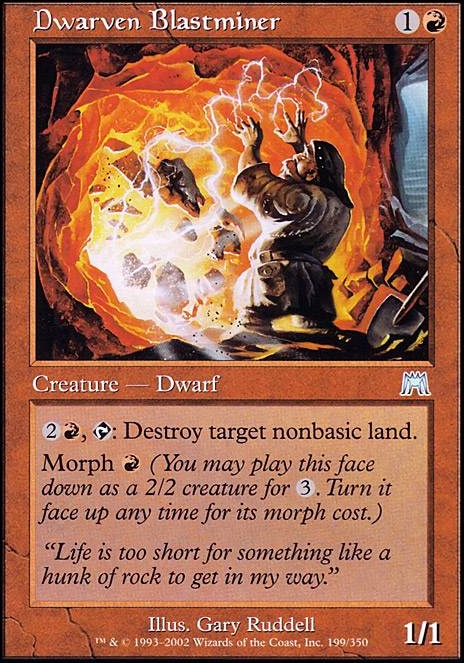 Dwarven Blastminer occurrence in decks from the last year

Land Destruction EDH, Because No Land For You!

Have you considered Dwarven Blastminer? This deck feels like it would be weaker at a multiplayer table, more because everyone would kill you. I do love the preemptivity of your removal strategy.

If you're hankering for more dwarves, Dwarven Miner and Dwarven Blastminer are both excellent for punishing nonbasic lands, which most players have a healthy number of in EDH. Since you're running plenty of basics yourself, you could also try Duergar Hedge-Mage - no harm having some handy removal on top of a pilot for your vehicles! Duergar Mine-Captain can untap himself, letting him pilot multiple vehicles at once (somehow... try not to think about it too hard, ha ha.) Taurean Mauler might kind of feel like cheating, but it's useful in multiplayer games since it can get so large and does still count as a dwarf.

No suggestion I can stress as much as Dwarven Recruiter, however. He lets you put all the dwarves you want on top of your library - and if you immediately attack with Depala, you can scoop them all up into your hand! Talk about card advantage.