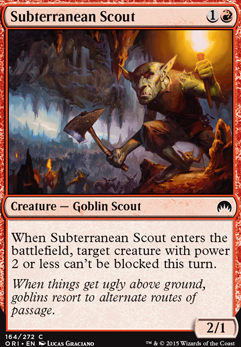 When Subterranean Scout enters the battlefield, target creature with power 2 or less can't be blocked this turn. 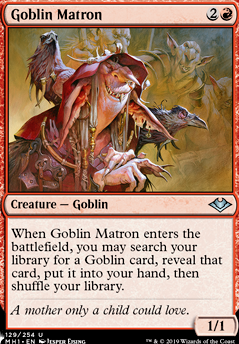 Goblins With Torches
by ClockworkSwordfish 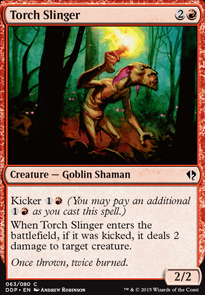 vomitpile Legion Warboss has a much more lasting effect on the board state while allowing for more defensive play if needed. This is mainly due to the mentor effect that is fairly useful if it comes in after Metallic Mimic allowing you to buff creatures that might have not received the Mimic's Effects. While it might not be as damaging as Goblin Rabblemaster I feel that it is much more reserved in its play and responds better to spot removal.

Honestly if you just remove two of the Murderous Redcaps and one of either the Stingscourger or Subterranean Scout you would be able to run both. That or you can just remove the Legion Warbosses and replace them with the Goblin Rabblemasters if you want a more aggressive deck. Honestly I updated the deck to its current state for testing of the replacement in the next few weeks.

I guess it would be a better idea to run both to test their effects so I'll update the deck today.

Goblin Tunneler rather than Subterranean Scout?

All non-blue cards from original Innistrad - Kaladesh expansions that depict torches. I excluded some cards like Unruly Mob and Village Bell-Ringer in which the torch is not really noticeable at first glance. Also Fireshrieker because I remembered it off-hand.

Looks better, but I think you can still improve. Cut Subterranean Scout, Shimmering Wings,Writ of Passage and Pyre Hound for some number of Slip Through Space Temur Battle Rage, Mutagenic Growth and Delver of Secrets  Flip. Lastly if your budget allows you should get Lightning Bolt as it is the best red card in magic.

And Scythe Leopard can replace cards like your Bonded Construct.

Definitely try to acquire some explosive vegetations, and as suggested already consider Omnath, Locus of Rage.

Sword of the Animist works really well too.

You should have Jaddi Offshoots in here if you have them.

ah thank you :D was running Subterranean Scout for piledriver XD but yeah, don't like having to use Lavastep Raiders and needed better 1 drops. forgot about Lightning Beserker :o will absolutely consider that, and maybe bellstriker at 2 (it is a legendary so discouraged me. i am open to outside of goblins.

Am still getting this right and was having trouble decided whether more creatures, or more buffs or what, thanks for answer

You have a lot of direct damage spells, which tend to be less useful in EDH than other formats. Your plan isn't to burn them out, and things like Draconic Roar doing 3 damage won't take down a lot of the creatures you absolutely need to get rid of. I would definitely rethink your instant/sorceries to coincide with your deck's plan (which to me, seems to be getting creatures on the battlefield and eventually swinging). Creatures like Boggart Brute can be decent in limited where hitting a single opponent for 3 every turn puts a decent clock on, but in EDH I will gladly allow you to hit me for 3 damage while I wait a turn to hit you for 25. Maybe that's just my meta, but there are a few dudes in your list that just won't impact a game as much as you would want them to. Some considerations for removal should be:

Goblin Rabblemaster (yes, yes, he's good, but forcing your team to swing might not always be the best plan, and you have no way of making him unblockable like with Rogue's Passage, so they most likely chump him anyway. Still, he can be a win con with enough Goblins out, so this would be my last creature to cut. I do like him, but you have to play him when he's most useful, and that usually means giving him haste)

There are a lot of good goblin cards you can add in as you find people to trade with or run into some money. I would consider:

Moggcatcher - not a goblin, but he searches for them.

Rummaging Goblin - gives you much needed card draw, and with Feldon in your deck, allows you to dig for creatures to bring back as artifacts

Kiki-Jiki, Mirror Breaker - just, so much awesomeness. If you ever get him, make him your commander and you'll have a ton of fun. He's still great as one of the 99.

Also, I would consider running Warstorm Surge. With so many creatures entering the battlefield, you'll be hitting for a ton of unblockable damage that you can direct to players or creatures at your leisure.

Man... this makes me want to remake my red EDH deck... lol