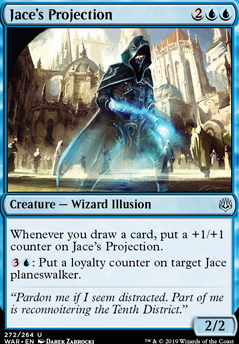 Whenever you draw a card, put a +1/+1 counter on Jace's Projection. 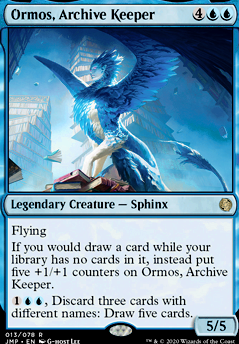 Draw Me to the Moon
by Biggie_Taco

Racing for the win
by CombativePants

As long as you control a Will Kenrith or a Rowan Kenrith planeswalker, whenever you activate a planeswalker loyalty ability, tap target creature or planeswalker controlled by an opponent and Sibling Rivalry deals 2 damage to it. It doesn't untap on its controller's next untap step.

Will and Rowan had bickered and fought before, but until now, never had their disagreement risen to violence.

Create a signature spell or a creature ally for Angrath. By creature ally, I mean something like Jace's Projection , Rowan's Battleguard (interestingly, TappedOut doesn't have this card in its library to link to), or Angrath's Ambusher (I obviously know Angrath has one; I want to see something different, something more closely aligned to his character).

I have a thread that you can post this on if you are looking for help with it called Quick, Thoughtful Deck help. As for my own suggestions, I see 15 Instants and 3 Sorceries. A certain card, Arclight Phoenix , seems like a very good choice for your deck as it makes the discards from your Thrills and Scions less awkward. Also, consider taking out the one copy of Ionize and Electrodominance for two copies of either Ral, Izzet Viceroy , Jace's Projection , or even a card like Bag of Holding . Ral can deal with the opponentâs big threats while also letting you filter through your deck, Jaceâs Projection can get pretty out of hand with extreme card draw, and Bag keeps your discarded spells able to be returned to you. As for any other advice, Niv-Mizzet, Parun seems pretty okay in here, and Mystic Sanctuary to get back some of your spells doesnât seem half bad either.

I think tempo-ish could definitely be a way to go. If that's the plan, then we could use more Gadwick, the Wizened . Even for 3 mana he seems great. You get to tap down opponent's board while flashing in creatures and countering spells. Late game he just draws all the cards.

Then you also want Essence Capture over Negate to keep up tempo. Most or all of the Negates could go to the sideboard.

I get what you want to do with Jace's Projection and by all means, you should! That's what we're here for. But the card itself is quite weak. It's a 4-mana 2/2 that doesn't impact the board in any way. When green decks are already churning out 4/4's and 5/5's by turn 3-4, I don't think it'll be able to keep up. Also, it dies to just about any removal (even Shock ) which is a huge downside.

I'd also want the full 4 copies of Sinister Sabotage .

I might try Jace's Projection if I find myself in a more casual pod. Would likely replace the combo pieces with cards like that. I will be away for about a month, though I may try to pick up a Mindmoil and try it out at a different place during that time.

multimedia Appreciate the feedback again, yeah I'm going through constant changes with this deck at the moment. I'm definitely re-adding opt and decided to rid of Jace's Projection since the card draws would be better for a draw deck so to speak. In this case, running out of cards seem to be more important in a way. While still having the cards needed.

I was thinking of finding a way to add in an Augur of Bolas since I like the idea of a 1/3 to help early game as well to draw a certain card type from the top three of your library. I've tried experimenting in arena a little and it seems to get by although with Benthic Biomancer I kind of see the draw/discard idea but sometimes having to discard the stuff you need makes it a bit hard to manage later on.

Appreciate the tips. Will keep on working at it with the recent advice given. Think I may be able to fine tune it up a bit better now. :)