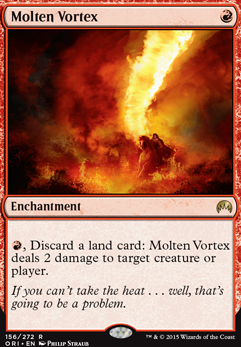 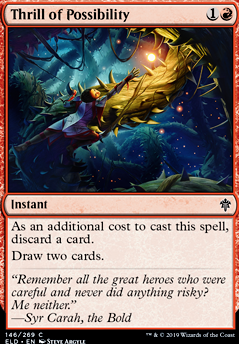 I play a similar deck. In my deck I use Molten Vortex , Elixir of Immortality . Molten is used incase I get pithing needled. And elixir is to reup my library. You can also put Swans of Bryn Argoll

That was the first deck I made back in 99. I've always been a fan of tax assault.

Lightning Axe - Dismember but in red. Sometimes throwing away your least valuable card such as a land or mana rock is definitely worth it.

Wear / Tear - Any deck in these colors needs this.

Slaughter the Strong - Never under-estimate the power of a sac-wipe. It may spare your opponent's commander, but unlike Wrath of God it removes nasties like Avacyn, Angel of Hope , Void Winnower , Blightsteel Colossus as well as bypassing Gaddock Teeg .

Molten Vortex - Don't waste premium removal spells on hatebears. You can also remove nasty commanders and combo pieces like Gaddock Teeg , Edric, Spymaster of Trest , Kiki-Jiki, Mirror Breaker , Azami, Lady of Scrolls and Laboratory Maniac . The bonus is, its an activated ability so your opponent's counterspells can't bail them out either. Also helpful at delaying potential planeswalker ultimates as well.

Murderous Cut - A lot of blue decks will go out of their way to include Treasure Cruise , but they tend to forget this card exists. Unconditional spot removal at one mana is definitely worth a mention.

Darksteel Mutation - Place it on their commander. It's like Pacifism but with the added bonus of surviving board wipes. This means unless they have a sac outlet or enchantment hate you've practically exiled their commander from the game for 2 mana because it "removes" the commander without being able to send it to the command zone. Can also be placed on your own creature for an A+ chump blocker.

I am newish to magic and had a friend recommend this deck to me to beat one of our other friends. Needless to say I won, I won so much it is banned in my circle of friends. I ran exactly what you have up top for 1v1. We play a lot of 4 player FFA so I added a variant (since I kept decking myself and not having enough mana on hand to deal 60 damage) where I run Psychic Corrosion and added some Index âs as well. Thank you from a very novice player (me) at starting a legitimate addiction. The 4 player FFA deck is 4x swans, 4x seismic assaults, 4x psychic corrosionâs, 2 indexâs, 4x treasure hunts and basically the same as the 1v1 above I removed the Molten Vortex âs and the Anger of the Gods to make room and not screw up the mama ratio too much.

Why not splash red over blue for access to Faithless Looting , Magmatic Insight , Molten Vortex and Seismic Assault ? Prized Amalgam could be cast off of Gemstone Mine if you wanted to keep them in, but Young Pyromancer could be a decent replacement since this is a midrange, spell based deck.