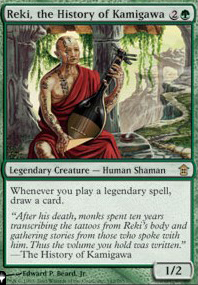 Reki, the History of Kamigawa

Whenever you play a legendary spell, draw a card. Reki the History of Legends
by Jukeloyal

Reki, the History of Kamigawa Discussion

I have an Ur-Dragon deck and have a few recommendations. For lands, Unclaimed Territory and Ancient Ziggurat are great for being able to add any color, provided it's used to cast dragons. As far as legendary support goes, Time of Need lets you tutor for any legendary creature. Urza's Ruinous Blast exiles everything that ISN'T legendary, clearing the board for dragons to lay waste to opponents. Lastly, Reki, the History of Kamigawa lets you draw every time you cast a legendary spell.

Wrath of the Gods

+1! The deck looks fun to pilot and I'm tempted to build a deck around Esika myself!

I'd recommend Reki, the History of Kamigawa as he is a powerful card draw engine given the no. of legendary spells you run in this deck.

Bloom Tender is awesome too but on the pricey side. Joiner Adept , Prismatic Omen and Dryad of the Ilysian Grove are great too, acting as redundancy for Chromatic Lantern .

abby315 on Sakashima, of a thousand faces â¦

Are you committed to the colors/partners? I feel like the new Kodama of the East Tree would be a very good partner choice. You lose black, but Kodama is busted and very good in multiples!

And final note: If you could find a way to make Linessa, Zephyr Mage work in commander, it'd automatically be a fantastic deck.

+1 from me from the concept alone. I like the theme/gimmick of legendary wizard tribal in all these colors. Snuck in charm tribal too. Maybe complete the Confluence and Command cycle?

0 artifacts or enchantments? Capitalize on their absence with a play set of stax hate.

Reki, the History of Kamigawa while not a wizard would still create real value in this list.