Rather than pay the mana cost for a spell, its controller may discard a card that shares a color with that spell.

Dream Halls occurrence in decks from the last year 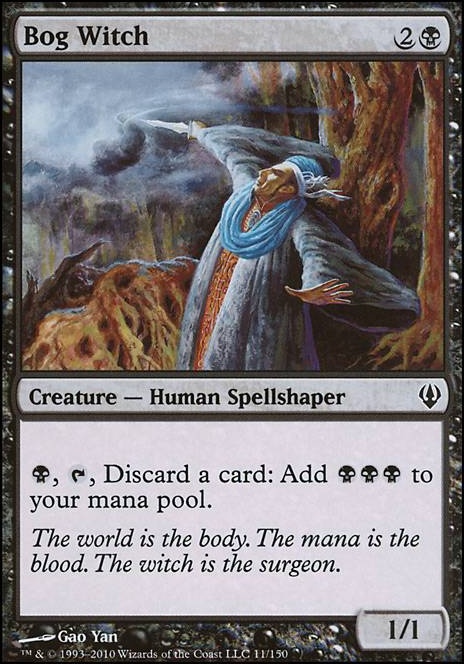 smashadams83 Thanks for the input!

Rite of Replication: Is that how that works? I'm a little fuzzy on how the legendary rule applies here. I view Rite of Replication as a copy of a sphinx which I think is good, and the kicker option can be huge. The slot that it would have to take I think would be Clever Impersonator or Phyrexian Metamorph. But I prefer the versatility of those cards to the kicker ability. Perhaps its time to take out my trusty Serra Sphinx.

: I should definitely look into squeezing them in there, to help with draw, drawing cards is probably one of the most important themes of the deck.

Mystic Sanctuary: I agree with you on this one, I should probably take out an Isalnd for it.

Back to Basics: I have thought about this one before, I think its an excellent card that could take the propoganda slot in some matchups. Typically I don't run it because I don't have fun with it, but it definitely deserves a spot. HOWEVER I don't know how to get rid of it when I want to start using my Shrine to Nykthos. There is a little anti synergy here.

I'll have to do more thinking on Mind Over Matter && Dream Halls, I think they have potential. IDK what slot they would take yet, but I can see them putting in work if I include more card draw into the list. What's holding me back from these cards is that they are basically worse versions of Omniscience.

hey this looks like a really solid deck! long term plans is amazing and i play it in my version found here https://archidekt.com/decks/368865#A_Riddle_of_Sphinx

i put a brief description of what my deck is looking to do in there.

rite of replication is certainly worth it, it can win you the game most often if you play it as you will have so many cards in hand people will just scoop. If you kick it on unesh its 30 triggers which goes 120 cards deep and that would leave me with nexus of fate with the only card in my deck.....

id suggest sphinx of enlightement and windreader, then do alot of extra drawing for you. phyrexian metamorph has great utility and if you run any bounce type spells you can reset him.

my secret weapon is Mind Over Matter which is just insane if you land it with nykthos or nyx lotus you can just go nuts and usually storm off. highly recommend it as you will usually have plenty of cards to dump to it to keep chaining spells together. also Dream Halls is neat here and can do some serious work.

back to basics also is nice if your meta plays the right manabases for it.

i need some upgrades like mana crypt, opal and mana drain but otherwise the deck has been really smooth since the paradox engine ban :(

let me know if you have any questions!

First and foremost, huge fan of this build. I jumped on here for some help because my friend has a Torbran, thane of redfell that was kicking my ass and I needed to develop something to go up against it and this build was it. Thank you! I am working on my own take on this build.

What are your Thoughts on a Dream Halls and Psychic Vortex combo? havenât had to much gameplay with it, but it seems to sync up pretty nice.

Breathstealer's Crypt is another card I ran into that seems like it would sync up nicely after a Mindslicer Cyclonic Rift combo.

Hey, nice deck, I like the idea, madness is tricky I think, I love the idea of having all of the synergies but Iâd pick a main one and stream line the others to help you decide what to remove.

I thi The suggestions I would make for the list as is are:

Cut Pawn of Ulamog and add in Pitiless Plunderer

Pros. Itâs treasure tokens so much better for mana fixing as adds one of any colour, not colourless. Itâs whenever another creature dies, not non-token creature. Which can also be very beneficial.

I think you could cut down on the removal as youâre running a lot of it, maybe adding in Attrition would be good because itâs constant. Slaughter could be cut as could Unfulfilled Desires If you could budget for it Dream Halls could be very good, because itâs a madness outlet that lets you cast another spell too.

Swap Kalastria Highborn for Blood Artist too, You donât have to pay to activate it and itâs easier to cast.

I hope you found this useful :)

Grimgrin's Endless Ranks of the Dead

I would recommend Josu Vess, Lich Knight expensive but well worth the tokens especially if you have Rooftop Storm or Dream Halls. I run both in my Grimgrin deck.

Also some of my favorites which can work well in your favor with the tokens is Shepherd of Rot, Gray Merchant of Asphodel, and Gempalm Polluter. The Gempalm Kill comes out of nowhere and Iâve won many games that way.

Feel free to give me feedback as well. Always looking to improve! +1 Good Luck

I'm definitely going to improve mana rocks, hopefully with Moxes but they are quite expensive so I think I'll start with 2 mana ones, for Izzet Signet there is a big NO from me, it's only 2 colors deck and I need mana to activate it what makes it inefficient if i played it for my last mana and it got replaced by Talisman of Creativity.

Furthermore, I'm looking forward to improve the deck with fetch lands, Scroll Rack and more tutors like Intuition or Personal Tutor helping me to combo off with Dream Halls/Omniscience and get my infinite turns.

The only other thing I can recommend is more wheels I suppose that's not just straight upgrades (I understand that budgets are a thing lol). Wheels allow you to find your combo pieces faster while also allowing you to do some damage with Parun. If you really want to make your wheels that much better and are willing to really extend on the budget, you could add Mind Over Matter and Dream Halls.

Guys sorry it took me that long to answer you all!

Rambolicious_0 Thanks for the suggestion, but I think Raiders' Wake is a better option.

FiendishElf Thank you mate! I really appreciate that!! Dream Halls + Waste Not is fun as hell! LOL

pyrophyte Thanks! Dream Halls is a double edged sword, you need to be careful with it! Try casting it only when you can "chain" your wheels! Isn't Tidespout Tyrant a bit too heavy?

ToolisMaynard The site is a bit buggy and sometimes it happens. :( Sould be working fine now! But I need to warn you that the primer isn't 100% updated with the list.