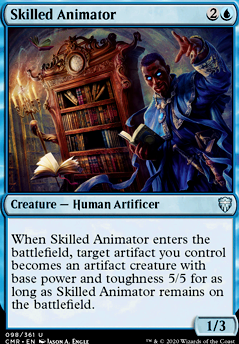 Skilled Animator occurrence in decks from the last year

Given the recent change to the companion mechanic, I've taken Lurrus of the Dream-Den out of the sideboard and simply put in 2 copies of the card into the maindeck, seeing as its ability still hits every permanent in the deck other than Skilled Animator, which is also back as a 2-of.

Hallowed Fountain and Glacial Fortress can easily be replaced in order to make the deck more budget friendly. If you want to be more aggressive, you can swap out Lurrus of the Dream-Den from the sideboard and slot in 4 Skilled Animator. If anyone has any constructive criticism I'd definitely like to hear it :)

I love it, Kiran_M! It's difficult enough to play an artifact deck I believe, although I see that Ensoul Artifact and Skilled Animator can make a pretty good deck out of small Thopters and other Artifacts. It's a good thing that Artifacts are usually colorless, because three colors is hard to do.