This has ward as long as this is untapped. (Whenever this becomes the target of a spell or ability an opponent controls, counter it unless that player pays .)

Whenever this deals combat damage to a player, draw a card. Then if you have fewer than three cards in hand, draw cards equal to the difference. 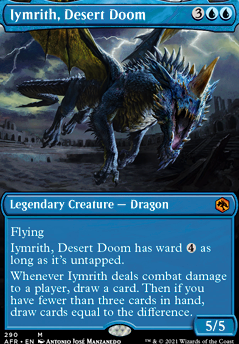 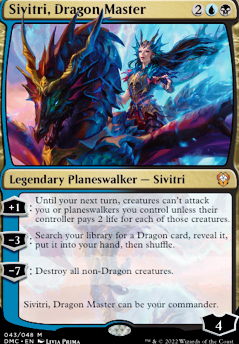 I am looking to improve my card draw for my flash/Flicker Dragon deck using Renari, Merchant of Marvels and Dragon Cultist I feel like I have a good amount of ramp but I struggle with consistent card draw. The only ones that I have that can really help that I have so far are Icon of Ancestry Iymrith, Desert Doom Kindred Discovery Loch Dragon Rhystic Study Vanquisher's Banner If there are more cards that can help with some good card draw I am love the suggestions. The deck list is below

If you're looking for more draw, how about Iymrith, Desert Doom? 5 mana 5/5, draws cards on player damage, and has a big ward if you need it.

I'm not sure what the non-green Pioneer ramp options are. You're going to need a heavy control package at MV 1-3 to stay alive long enough for the Dragons to be relevant.

What are some cards that you think are just really well designed and good for Magic The Gathering as a whole?

Recently I had Iymrith, Desert Doom/Dragonlord Ojutai suggested for one of my decks and I gotta say I really love these cards. They seems like a very fun finishers.

To put the focus on Iymrith; I like this card because it does so much and yet still seems "Fair." It's legendary and it just feels legendary if this gets in play. The card advantage is conditional so it cant just sit on the field and let you draw; and yet by attacking it become more vunerable to efficient removal spells. The in the casting cost makes it so it cant be splashed into any deck with a total cost of "Only" five mana" so its still very playable in my opinion for many constructed formats.

Iymrith, Desert Doom. its a new dragon that is a neat control wincon

kookoo That definitely could work, as could Spark Double and Sakashima of a Thousand Faces (who could also be used for neat tricks like using Teneb, the Harvester to reanimate himself). The difficulty is that we are fairly tight on slots already, and I am thinking about cutting Vorosh, the Hunter and maybe another card to put Scalelord Reckoner back in as well as maybe adding Kairi, the Swirling Sky and/or Iymrith, Desert Doom. Every dragon we cut from our toolbox leaves us without a tool that we can summon any time, so support pieces need to be really good in order to make it! Neat idea though!