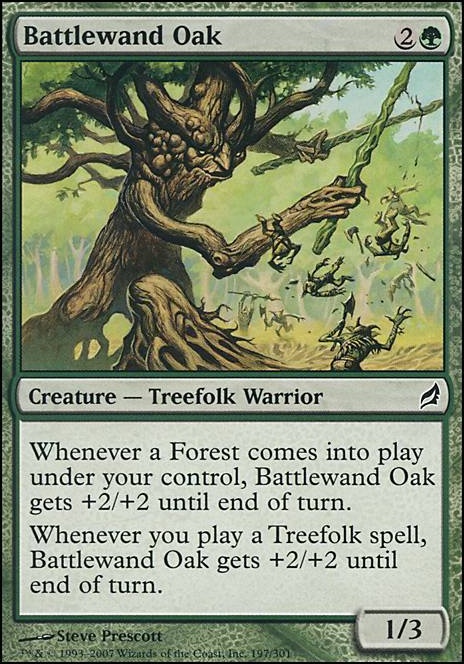 Whenever a Forest enters the battlefield under your control, Battlewand Oak gets +2/+2 until end of turn.

Whenever you play a Treefolk spell, Battlewand Oak gets +2/+2 until end of turn.

I am Doran, I speak for the trees
by aqwerty 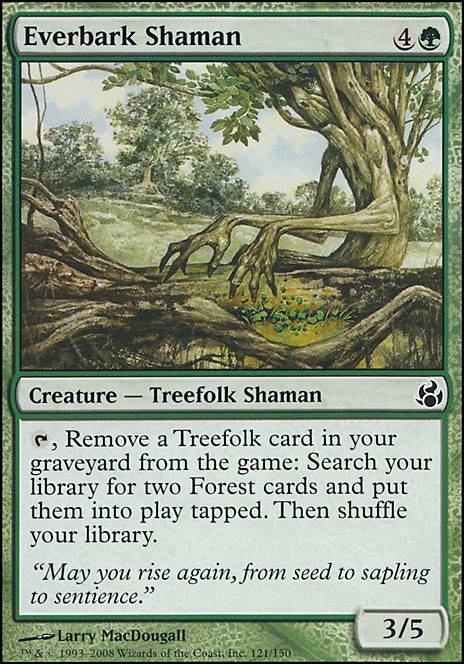 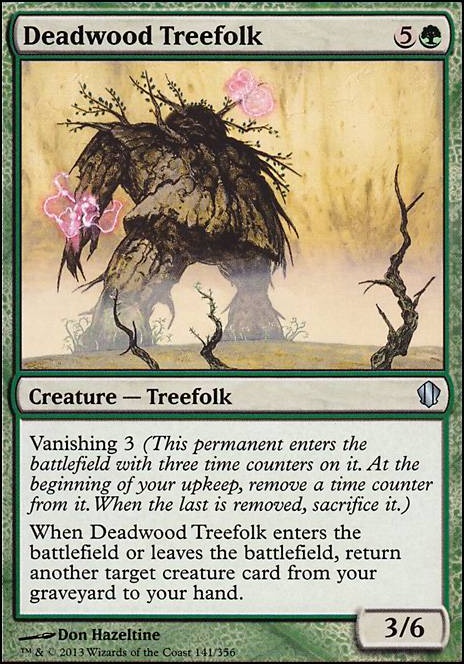 Wabbajacke I don't think Faeburrow Elder would be very useful because Doran is the only other multicolored card in the deck, so Birds of Paradise and Bosk Banneret are better for ramping mana here.

Colfenor, the Last Yew has a nice effect but I think it just costs too much for what it does. If it costed 2 or even 1 less it would be worth considering.

Meanwhile, Battlewand Oak and Everbark Shaman are solid choices but just aren't as strong as the beaters that I'm using.

Nice Deck! I tried to build my own Treefolk-Tribal, but never got my hands on the Cards i needed. Whats youre thougth about Faeburrow Elder for Ramp? And since you run 3 Colors you could also incloud Umbral Mantle which goes infinity on Faeburrow Elder .

Colfenor, the Last Yew could also be an good extension, but is a little bit high CMC. But this should be no Problem in a Treefolk-Tirbal. Im not quite sure if he is modern Legal.

And Battlewand Oak could smash your opponents together with Everbark Shaman .

What are thoughts about them?

Hi Cheerful_Zucchini, thank you for the corrections and great suggestions. As for Abundant Growth , I was confused about the wording thinking it added a mana (but itâs just color fixing) and trying to figure out some card draw. There are a lot of decks that can quickly outclass this brew in that area. Perhaps Lead the Stampede will go in?

Everbark Shaman âs interaction with Battlewand Oak is cool, and I am going to give some thought about how to fit it in. Thanks again.

Mathmagician Thanks! I can see your point about Bull Elephant , I really wish it was 5/5 to trade with Gurmag as well. I guess I saw it as a way to place down more forests for Battlewand Oak , but it's definitely underwhelming.

And as far as landfall options, there aren't too many other options in green outside of Battlewand Oak which is the same as landfall for my deck. It's also triggered by another Battlewand or Tilling Treefolk entering. I could see maybe something like Grazing Gladehart for SB against burn or something.

Any suggestions to replace the elephant?

The Hills Are Alive With the Sound of OH GOD

+1 from me, Treefolk Tribal is highly under-rated.

Dryad Arbor could be good since most of your ramp can grab them. They also turn your early Green Sun into ramp.

Sheltering Ancient Could be dangerous(to both players lol)

Nemata, Grove Guardian good if you decide to run Life and Limb

Battlewand Oak and Orchard Warden are both comparatively not that good compared to other creatures on your list, so I would recommend that they make way for other creatures. Fruit of the First Tree also could make way for more interaction, such as removal (Beast Within, Dismember, Ratchet Bombs, etc.). You should also have more turn 1 plays such as Oath of Nissa, and/or more ramp. Otherwise, you might be twiddling your thumbs for the first 3 turns and by the time you make your first play, you are on the verge of losing already.

There are decent ideas and I'm happy you decided to make your first deck a Treefolk brew. There are however quite alot to work on here even if it's meant just for casual games. I don't know if you've ever looked into any deck building guides, but you mana curve is really important to be in line with your lands and ramp. Now your curve is super dependant on LUCK, which is not great. Unless you have consistent ways to cheat out your excessive amounts of 6 drops, you shouldn't have that many or they will clog your hand. I'll list a few semi-budget changes that will help.

Lurking Predators could be swapped with Descendants' Path. It won't net you as many procs, but you can cast it on turn 3.

Go up to full playset on Treefolk Harbinger, cause it tutors up any creature you need from your deck and that allows you to go down on the quantity of big threats.

Emerald Medallion is nice on mono color, but the heavyness really calls for more Bosk Bannerets or Medallions. Medallion is better when it's in your opening hand, since it drops topdecked Bosk to a 1-drop, but Bosk is tutorable with Harbinger (Might not matter which you run more of, so go with your gut.)

I really like Verdeloth the Ancient and Fungal Sprouting, so you could switch some other lesser 6 drop for another Verdeloth.

These couple swaps helps with consistency:

You don't need full playsets of any big drops if you go with 4 Harbingers.

All the greatest treefolks are ridiculously expensive, but if you ever want to invest little by little and keep your Tribal/Zoo theme, I suggest looking into my primer here Treefolkdancing my way to competitive scene!.

Yea, I think some sort of ramp could fit a Treefolk deck nicely.

I've been tinkering around with a couple different Treefolk builds and cards like Explosive Vegetation, Nissa's Pilgrimage, and Harrow play well with Dungrove Elder, Dauntless Dourbark, and even the addition of Battlewand Oak. A deck with lots of ramp also seems to want higher-CMC Treefolk as well like Ghoultree, Woodfall Primus, Oakgnarl Warrior, and Kalonian Twingrove. I would love to put something like that together but I worry that we may run into problems like being too slow against a lot of the typical Modern decks or being stuck with too many high-cost spells in hand during the start of the game.