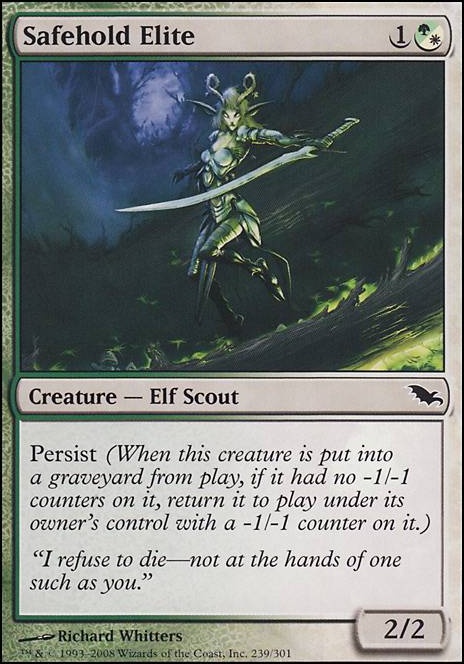 Scouting for Combos
by Lame_Duck

All Death no Life
by InOzWeTrust

Ivy Lane Denizen plus any green Persist creature, such as Safehold Elite or Rendclaw Trow , works. Unfortunately, that combo costs quite a bit more. Seems like a few people have been brewing around with it.

To start, I would say 240 cards is the sweet spot for a Battle of Wits deck. That gives you a relatively decent buffer zone, allowing you to reliably have 200 cards in-hand once you are ready to cast BoW (accounting for an opening hand of 7 cards, use of fetch lands, and card draw). Conveniently, this is also the equivalent of building a 60 card singleton deck, and that's probably the best way to go about designing your deck's proportions--think like you're building a 60-card singleton deck, then multiply everything by four.

I would for sure add copies of Gitaxian Probe , Street Wraith , and Manamorphose , as each allows you to dig through your deck for free.

With regards to tutors, you should absolutely run them. You have access to a whole host of great cards, such as the 1/2 mana Black tutors, which are necessary to find your singular copy of BoW.

The biggest problem I see with this deck is that it is a bit of a one-trick-pony, though this is probably not as big of a deal in a format where vintage-era tutors are usable. Ideally, you will want to run another backup plan in case something is getting in the way of BoW. My recommendation would be an infinite persist combo. With three moving pieces (persist creature + something to nullify the persist + sacrifice outlet) persist chains are not generally the easiest combos to assemble. However, what sets them apart from other combos is the diversity of options you have. With 240 cards, diversity is important--it means you're more likely to draw into one of your combo pieces, and you can always tutor for the ones you don't have (particularly since you're in an unrestricted format and can run the whole set of 1-mana tutors).

For creatures, you have Kitchen Finks , Murderous Redcap , and Safehold Elite . For enablers, you have Solemnity and Melira, Sylvok Outcast , and any number of cards that confer a +1/+1 counter when a creature ETBs. For outlets, you have all manner of 1-CMC creatures like Viscera Seer , or damage-dealers, like Blasting Station . (These are all modern-legal options, you'll want to do a search for vintage-era cards to see if there's anything more efficient).

Any love for Anafenza, Kin-Tree Spirit ? nonbo with geralfs, amazing for the rest.

Altar and feeder's payoffs mean you aren't as reliant on an etb like madcap, so Lesser Masticore / Putrid Goblin / Safehold Elite are options. Another interesting option is Melira, Sylvok Outcast , and in green Young Wolf offers a t1 creature to combo with.

Ocheyo As always my Brother, your observations are always on point. The thing is though, that this deck is based on another combo elves decklist & that is why some of the combos may not be as obvious at first. Safehold Elite is in there for that reason. I found if nothing else, I need more land ramp.

Hey! Saw your deck posted before FLATSO99's and thought I'd comment since I also play Ghave.

First off I assume your goal with this deck is to play "fair" with a go-wide tokens and counters strategy with some options to win with a combo, but I'd like to offer my primer for you to take a look at and borrow anything you like. I go into detail the different combos you can get from Ghave and how they work as well as a list of combos found in my list.

That being said, I have a few suggestions for how you can strengthen the deck even if you're not looking to combo off as soon as you can.

Your mana curve is a bit high, and I think you can cut some of the more mana-heavy cards to trim the deck and let it play more smoothly. For instance I see Butcher of Malakir but no Dictate of Erebos or Grave Pact . I understand if it's a budget problem, but I personally run Grave Pact thanks to it's lower cmc. Yes, Martyr's Bond does the same thing and even extends to permanents other than creatures, but I find it's not worth the mana cost. You could probably cut that one, too.

I know you mentioned Walking Ballista , and I eventually cut Triskelion in my own deck for it. It only needs an extra card (either a sac outlet or Blood Artist effect) to combo with Mikaeus, the Unhallowed which will still often be cheaper on the mana to cast than just Triskelion .

Cryptolith Rite is strictly better than Citanul Hierophants . I'd swap that in for it.

Unless you're building the deck around it, I'd cut anything with Landfall. It's almost never worth it if you're not making it a big theme in your deck.

I'm not a fan of Faerie Macabre . There are better cards for graveyard hate. Bojuka Bog comes to mind which you should run if you really need the grave hate. If you're insistent on having a spell fill that slot, Shred Memory is better as it also acts as a tutor for a 2 cmc card.

Pack Rat is unnecessary. I'd focus on the saproling tokens. You'll have better synergy in the deck that way.

I also don't think you're running enough elves to get the most out of Elvish Archdruid . I'd cut that in favor of other ramp. The ramp you have in the deck already is pretty good without him.

I notice you have Kitchen Finks which is an excellent combo piece, but have you considered running any undying creatures (besides the effect of Mikaeus, the Unhallowed )? I highly recommend Young Wolf as he's an easy route to getting as many tokens as you want. Strangleroot Geist or Butcher Ghoul can also be good. You could run more persist creatures if you like as well. I've liked having Puppeteer Clique and Woodfall Primus in my deck since if you can recur them over and over, you get some awesome effects. If you want cheap ones to play, Safehold Elite is a possibility, and Modern Masters now has Putrid Goblin which is basically Butcher Ghoul but with persist instead of undying.

Protean Hulk has been the center of most of my wins. Pattern of Rebirth is a quick way to cheat him out, but you should consider Natural Order as well since it gets the hulk out just as quickly. I see Karmic Guide , but I don't see Reveillark or Saffi Eriksdotter . I would highly recommend running at least one if not both of them. They create an endless recursion combo that lets you get everything back from your graveyard or trigger a Blood Artist effect to kill the table. Now I assume you use Leonin Relic-Warder with Karmic to go infinite. That's good, but I still say having the recursion availability to access your graveyard is a big advantage.

I don't know what your meta is like, but adding a bit more removal might help as well. At the very least Anguished Unmaking is better than Utter End and worth the switch.

Anyway sorry for the super long comment. I just really like Ghave and wanted to leave some constructive criticism to help you with your deck. I generally prefer that kind of feedback myself. Hopefully this helps.

Kogarashi on Does Fanatical Devotion need a ...

Additionally, because sacrificing is not destruction, the regeneration replacement effect won't keep your Safehold Elite from being sacrificed, the same way an indestructible creature can still be sacrificed.