"Remember that sometimes not getting what you want is a wonderful stroke of luck.â
- Dalai Lama XIV

My Story with This Deck

Iâm an extreme control player, and I feel like itâs important for me to stress this as my play style has always been a Simic style of value and control. I enjoy being in control. I enjoy saying ânoâ. But all that changed when I met Grenzo, Dungeon Warden . My LGS decided to host a conspiracy draft in October 2017 as they still had leftover packs that nobody was buying. I entered and had a pack passed to me that contained Grenzo. I read his ability and gawked...How have I never heard of this commander before? And why have I never seen anyone play him? He seemed so ridiculously fun that I decided to do the unthinkable at the time; build a Rakdos edh Deck.

Now many may know that there is a tier 1.5-2 variant of Grenzo that runs Doomsday. This is not that Deck. I decided to go a more casual, luck-based route. But what I found was an unassuming monster of a deck that could adapt to casual or competitive metas, win explosively out of nowhere, and truly felt like a slot machine of fun. This is how I came to love the chaos and flexibility of this Rakdos deck, and this is why Iâm super excited to bring this bundle of fun to you.

Grenzo is a combination of contradictions. Heâs consistency through chance. Heâs a chaotic toolbox. His gameplan is the same, but his wincon is almost always different. There truly is no other commander like him.

You should place your bets with Grenzo if:

You should place your bets with Grenzo if: 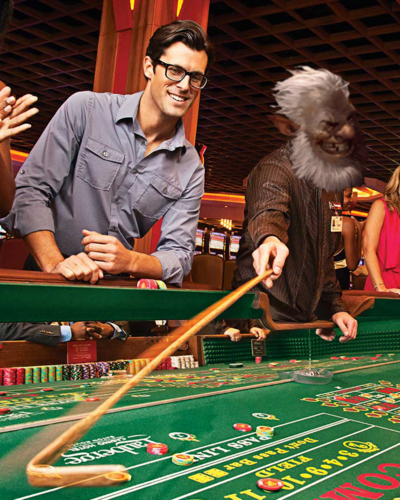 For future reference, I will be referring to the synergy of using the above artifacts to re-flip creatures as the DIGGER LOOP (named after a past inclusion Soldevi Digger ) throughout the guide.

Examples of good creatures to target:

Other creatures that immediately win the game with this combo:

While some more casually inclined decks focus on casting a big Grenzo to start flipping big baddies, this deck runs a much more streamlined approach. A strict rule was implemented when constructing this deck to ensure that every included creature had power 3 or less, which allows Grenzo to always be cast where X = 1.

Since the goal of this deck is to flip as much as possible, Grenzo needs to be cast as quickly as possible. So by keeping X at 1, it ensures he's always cheap to cast and can begin flipping immediately.

As a small caveat, if you have an extra mana when casting Grenzo, assuming it can't be used for a flip, feel free to make his X = 1. Otherwise, there is almost no reason to use activation mana as a source to pump up Grenzo. As long as his power is at 3, you have access to the whole deck.

The primary rule of opening hands is keep lands and ramp. You don't want to draw your key creatures at the start as most of them are already over-costed. So instead, your goal with every hand is to get Grenzo out as soon as possible and build your mana base to start playing the slots. Here's an example of an amazing hand:

Notice that the reason this is such an amazing hand is because it meets both of our goals. We have plenty of lands available, and then we have ramp through the Myr and Signet while also providing a cheaper activation for Grenzo in Heartstone.

Never keep a hand with 2 or less lands unless you have some amazing additional ramp to make up for it. Because honestly, Grenzo is one of those commanders where you could receive a 7 land hand, and it would still be worth keeping.

The early game should be spent building up your mana base as quickly as possible and casting Grenzo. The sooner you get him out, the sooner you can start the shenanigans. However, the speed at which you deploy Grenzo also depends on the mana accelerants in your hand.

The main rule is always maximize your mana. If you cast a Leaden Myr on turn two and then drop another land on turn 3, that four mana should either be used to buff up Grenzo where X=2; OR if you suspect removal, you should hold back and build up your mana base more.

I personally like to either cast Grenzo at exactly 3 mana or build up to 5 mana so that I can attempt a flip after casting him.

You should be building a strong mana base by now and using all of that mana for your glorious flips. This stage of the game really depends on what you find. Adapt to every flip and maximize their usage while also maintaining a low profile. Remember, the worst place to be is under a wary opponent's eye. So address problems, attack planeswalkers, and play as the "reasonable player". Your opponents should ignore you for the most part and should feel bad for even thinking about wasting removal on your creatures as a majority of them are rarely scary by themselves.

This low profile and lack of removal targets will assist you in building a board state that you can navigate into the late game.

At this point, you should have a pretty significant board from all of the flips and are most likely 1-2 cards away from ending the game. This is where you pivot from the "reasonable player" to the true "Rakdos monstrosity" that you are. Mow down opponents with your Goblin Sharpshooter or Gray Merchant of Asphodel . Tutor your Kiki-Jiki, Mirror Breaker using Moggcatcher to instantly finish the game.

The road map to your victory is something I can't determine for you, because Grenzo will be your guide. But rest assured that the chaos he provides almost always has a route of interactions that will win you the game.

Finally, there are two more questions to consider during your course of piloting this gambling maniac:

When do I cast Grenzo after being hated?

Aside from the early game, which is fairly straightforward, it can often be difficult to know when to cast Grenzo after being targeted for removal. So to answer this question more in depth, I've created a flow-chart to help you decide when to cast him. 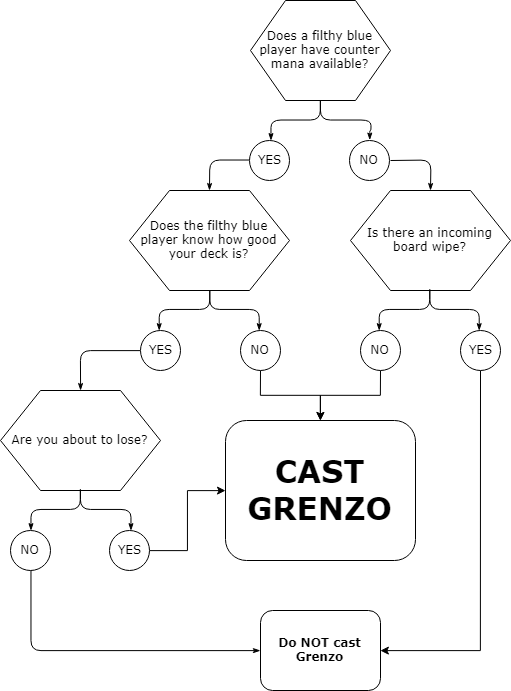 When do I flip?

90% of the time you should be flipping on your opponent's end step before your turn. This ensures that you remain inconspicuous as everyone else plays out their turns, and then you can suddenly blow out some amazing creatures and have a whole turn to use them before most players can answer the threats.

The other 10% of the time, flips should be used in case of an emergency. If you know the winning turn is coming up for another player, you should probably flip on your turn and try to find a win first. If your opponent is about to kill you or Grenzo, flip to see what happens. Last week, I was playing against an Etali, Primal Storm that had a brutal start with Swiftfoot Boots and an Assault Suit . The player had me at 14 commander damage and was going to swing in for the kill on his next turn. So I flipped out of pure necessity and found the Tuktuk Scrapper to remove the boots. I then played a Faceless Butcher from hand and ended up winning the game.

Never just sit tight and let a loss/board wipe occur. Always flip to gamble the odds. You'll be surprised how often they land in your favor.

I'm testing the waters with removing some slow manafixing for some high value lands. If mana turns out to be an issue, I'll make the necessary changes; but since the deck has substantial amount of ramp, I don't think we'll have an issue.

I've included a budget version so that you can see the affordability of the list. I removed foils, replaced several pricey cards, and was able to work the entire deck's price below $100! So not only is Grenzo powerful, but he's extremely affordable and I highly recommend you try him out.