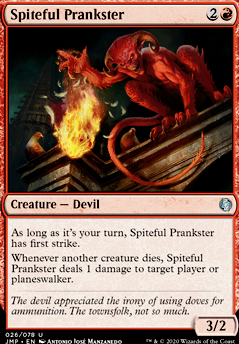 As long as itâs your turn, Spiteful Prankster has first strike.

Whenever another creature dies (is put into the graveyard from the battlefield, tokens enter the graveyard before they cease to exist), Spiteful Prankster deals 1 damage to target player or planeswalker.

The only thing I can say is that there is a chance you might be trying to do too much. You've focused more on Combat Damage dealing with Trample enablers and things that like when you attack, which is fine, but it just seems like some of the inclusion would be more geared towards a grindy late game win, as opposed to the general idea of what, in my opinion, is a pretty aggro commander.

The addition of things like Red Elemental Blast and Reverberate isn't a bad choice, but might be more of a meta play.

Legion Loyalist is good in theory, but with only 20 creatures I couldn't say your frequently going to get Battalion.

Dockside Extortionist is amazing, and I did consider him, but it feels like more of a combo piece for that type of deck.

Selvala, Heart of the Wilds I have mixed feelings about. She is amazing, but it's not necessarily a deck that even benefits that much from that kind of ramp. Where is all that mana going to go?

Skullwinder does it's job, the deathtouch is a nice add on, but its a worse Eternal Witness

Spiteful Prankster seems like it will just annoy people into targeting you.

The Great Henge good, but seems unnecessary/out of place

Cindervines unless your specifically trying to counter Storm decks, your better off with Krosan Grip

Curse of Opulence just goes along with Dockside Extortionist

Fertile Ground shouldn't be necessary if your mana is done correctly

Guardian Project feels like it would only be worth it if you were bouncing and recasting your own creatures. Again, you only have 20 to play with.

Really janky but you could use excessive mana from Mana Echoes on enemy turns to make their <=2 power creatures unblockable so that they can attack each other people. Braid of Fire works for your own purposes

the new Spiteful Prankster is probably more economic than Rage Thrower, even if neither works with Subira