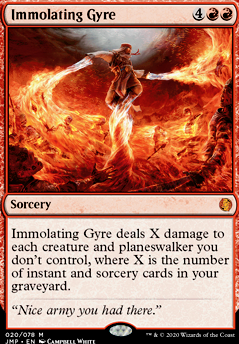 Immolating Gyre deals X damage to each creature and planeswalker you donât control, where X is the number of instant and sorcery cards in your graveyard. 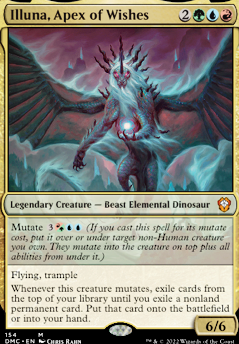 Thank you KBK7101, I appreciate! I haven't had a chance to play the deck irl yet, but it's ready to go next time my friends and I get together. I could see Immolating Gyre replacing Jaya's Immolating Inferno, especially since it can hit creatures and opponents simultaneously.

I'll be making my next batch of significant updates after getting some games in, and probably once Commander Legends 2 is dropped. Keeping an eye out for any spells from the set that could fit this build.

I wasn't super high on New Capenna as a whole, but I have to admit that Anhelo looks pretty awesome. This deck is really well constructed, too, as most of my recommendations I had ended up already being the deck. Bravo!

The only thing I think I'd recommend is Immolating Gyre. A nice boardwipe for spellslinger decks that could work really well here.

As someone who has a Kykar deck, I'd definitely recommend cutting some lands and adding some more artifact ramp such as Boros Signet, Azorius Signet, Izzet Signet and Mind Stone. Casting these will trigger Kykar, netting you a spirit token and helping to ramp you further ahead. I'd try and stick somewhere around 33-34 lands.

Other cards I'd recommend are Murmuring Mystic as another flying token producer, Jubilant Skybonder to help keep the heat off your fliers, Boros Charm for anti-boardwipe protection, Whirlwind of Thought for some more card draw and Immolating Gyre as a one-sided board wipe. Raugrin Triome is probably also worth a look.

Kykar is a super cool commander and I wish he had more lore. I really wanna know what plane he's from so I can tweak my basic land art accordingly. lol