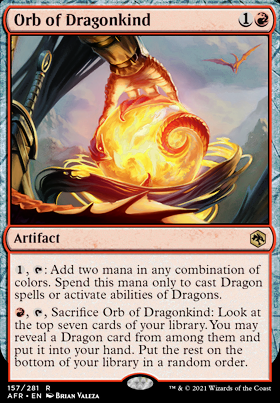 , : Gain two mana in any combination of colours. Spend this mana only to cast Dragon spells or activate abilities of Dragons.

, , Sacrifice this: Look at the top seven cards of your library. You may reveal a Dragon card from among them and put it into your hand. Put the rest on the bottom of your library in a random order.

To pull the dragon's tail.
by GartharTheStout

What is it? Dragons?!

Thanks KingLonsur! I will consider some options here, possibly with Fellwar Stone and Arcane Signet and the Orb of Dragonkind. Thanks for the suggestions!

What is it? Dragons?!

i'm not sure as to what your budget is but if you're still looking for suggestions.

you can use Mana Crypt Sol Ring for generic ramp. Arcane Signet Fellwar Stone for color fixing. Commander's Sphere Mind Stone to draw when they're useless. Orb of Dragonkind helps you dig through your deck in a pinch. And finally Urza's Incubator reduces their cost.

D and D (Dragons and Dice)

Thanks for the insight Jay3401 I am replacing The Deck of Many Things with Orb of Dragonkind. Will look into grabbing a Molten Echoes as well.

Missing the Promo pack version of Orb of Dragonkind

Orb of Dragonkind could be useful