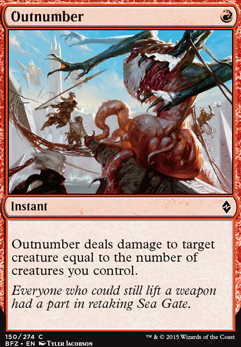 Outnumber deals damage to target creature equal to the number of creatures you control. 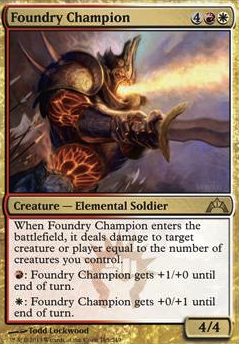 Krenko, the Angry Gobbo
by Venara828

Frosty_Mav on What is the interaction between ...

During the past weekend a question came up that no one in my play group was 100% on the answer of, if you target a blocked Zada, Hedron Grinder with Outnumber after paying only one, does Outnumber copy for each other blocked creature, or must you pay more into the X?

Ooh Foul-Tongue Shriek sounds really interesting. I'll definitely be trying that one out in a future variant.

Lotus Petal is actually what was replaced by Arcum's Astrolabe . As much as I liked Lotus Petal for its potential explosiveness, it was highly inconsistent. If this were a t3 Glass Cannon deck like Kiln Fiend it would be Lotus Petal without a doubt. But for one like this ot just hurts the consistency too much.

For the same reason, I'd never run Outnumber over Skred . Even without Arcum's Astrolabe , the fact that it reads lands is just far superior because of consistency.

Thanks for taking the time to comment. I can't wait to test your suggestion in a new variant. Seems fun as all crap.

Perhaps you could squeeze in 2-3 Foul-Tongue Shriek s as a surprise finisher to capitalize off of your high creature count?

Also, have you ever tried or considered something like Lotus Petal instead of the Astrolabe? On a related note, if you ever do decide to ditch the Snow stuff, I guess Outnumber could replace Skred ?

Food for thought at the very least. =)

As I noted, this was made solely from cards I already owned not already in decks I run. So some things, like Coat of Arms over Shared Animosity are things I already consider swapped in my head.

Anyways I really appreciate your feedback, I was considering Blasphemous Act but I think Earthquake might be better, despite the increase in actual mana cost.

Feel free to add other stuff, if what I said gave you any ideas!!

Anti-sticky_keys, I like both those options. Only reason I don't run Outnumber is I prefer being able to hit creatures or players, not just creatures, Goblin War Strike is sort of the better version of it in this deck. Ixthinon, I don't like Chancellor of the Forge since I often found it dead in my hand. Herald's Horn is an option I'm debating on trying to find space for. Kiki-Jiki, Mirror Breaker was in an earlier build of this deck along with Lightning Crafter ,but I decided against them, since I rarely got it off (especially since my group hates on Kiki-Jiki and prevents it from ever going off. DeltaDisease,no, I do not know that combo, please do tell.