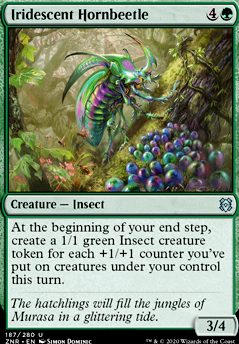 At the beginning of your end step, create a 1/1 green Insect creature token for each +1/+1 counter you've put on a creature under your control this turn.

Your Mother and I Sacrificed So Much
by King_of_Bees

The Bayou
by Amun

Hey! I love the deck.
What do you think of Hunting Triad ?
I figure it might work given the elves and +1/+1 counter theme.

Also wondering about Iridescent Hornbeetle and Cultivator of Blades .
Both work with a +1/+1 counter theme and they help with going wide. They don't exactly fit in with an elf theme though.

You definitely want more Great Henge in this deck. It's card draw, counters, mana, life gain, and you'll get it out a good bit with strong creatures. Putting four in is not unreasonable for such a powerful card even if it is legendary, but at least put three.

Basri's Lieutenant is just incredible in a deck like this, as are Stonecoil Serpent (combine with Gemrazer ?) and Luminarch Aspirant . Consider The Ozolith as well, as it helps you recover if your countered-up creatures die, as they often will do.

If you need cards to take out, Iridescent Hornbeetle is probably one of the first to go. Return of the Wildspeaker is just okay, Kogla doesn't really fit the theme, and Cultivate doesn't either. You shouldn't focus so much on getting Vorinclex out as soon as possible. Focus on making your deck not reliant on him so that you can get wins when you never even draw him. A deck like this needs to be fast, so you can't really spend turns ramping.

Manabase. A little lazy here, just 26 basics and hit go. Put in some Castle Garenbrig as there's almost no downside to it, 4x Branchloft Pathway Â Flip also no downside (except rare wildcards if you're not going to play Selesnya much) and gives some mana fixing, and that's really all you need. I can't think of other lands you benefit from.

There are some other Selesnya counters decks out there that are doing well even at higher ranks. I'd encourage you to look at them if you're struggling with your deck and see which cards are common and which aren't anywhere to be found.

Ezuri- The Tokens & Counters Are Coming Oh My!!

ImaginitiveRascal hey dude thanks for the feedback!!...well i do realise there are better options, thing is, some of them are pretty new and kinda dificult to get here,things like Iridescent Hornbeetle , Conclave Mentor , Felidar Retreat ,Garruk's Uprising would be ideal but gotta build with what i can get :S.... Still, can be very explosive!

There are a lot of cards that would look a whole lot better with a ton of creatures. You certainly have the potential to just cast a lot of creatures, but tokens are easier. There aren't too many token creators, so I would suggest more of those. You can take your pick, but with all the effects that pump the whole field, Iridescent Hornbeetle looks great because it doubles every time you put a +1/+1 counter on a creature. With Cathars' Crusade, that would get ridiculous.