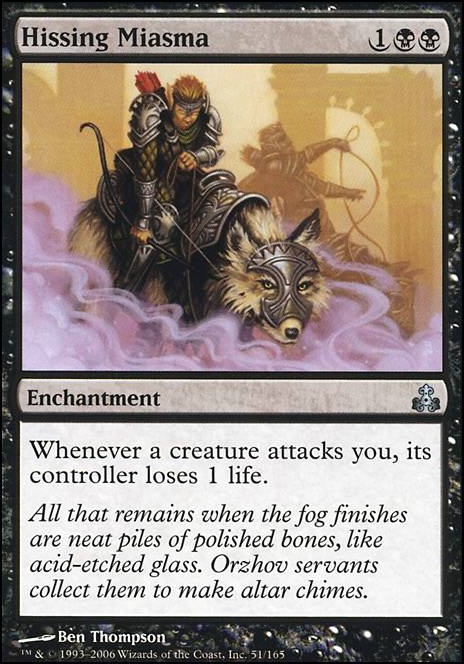 Whenever a creature attacks you, its controller loses 1 life.

The God of WAR
by itsgigglesxoxo 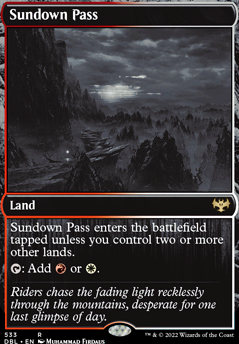 How would Gisela, Blade of Goldnight interact with cards like Hissing Miasma? I know Giesela double "damage" but since it is losing life would her effect not work in this situation?

Cards I have in Liesa, Shroud of Dusk that you might consider: Blood Reckoning, Boon Reflection, Hissing Miasma, Marchesa's Decree, Righteous Cause, Sanguine Bond, Wound Reflection, and Vito, Thorn of the Dusk Rose.

Without white you're a little hard pressed to find propaganda effects, but Collective Restraint and Koskun Falls are options, if you can find them.

Ophiomancer would be a good fit here; keep trading deathtouch tokens with their best attackers. I'll also mention one of my pet cards Hissing Miasma as a way to discourage mass attacks.

Thanks OatmealBear! Hope you enjoy it. Not a fan of the stax approach myself. You play it once and everyone hates it and no one has fun and you never play it again.

Not a big fan of Norn's Annex either to be honest. It plays less like Ghostly Prison and more like Hissing Miasma. Hissing Miasma is more of a punisher then a deterrent. No one pays the mana ever cuz its white only, so its just a tax on life, and life is just another resource, especially when you start with 40. Ghostly Prison works because people would rather spend their mana to cast stuff and attack someone else then have to pay mana to attack you since attacking used to be free. Psychologically, it just feels bad, like paying for Rhystic Study or Smothering Tithe. And if they really want to attack you, they still can, and paying 2 life to attack with a big dumb voltron guy is no sweat, so it only really stops big armies, which the other pillowfort cards do better. It also costs 5, which usually means 3 and 4 life which I don't think is worth it for a worse version of Ghostly Prison. And specifically to this deck, don't forget that Kwain doesn't just draw everyone cards, it also gains everyone a bit of life, and that'll start to add up, so people will have the life to spare anyway. So overall my experience with playing it is its just not as good and its better for a punisher deck than group hug, so it always ends up getting cut from my lists. Instead, I've started playing cards like Clever Impersonator, Estrid's Invocation, and Mirrormade as extra copies of other pillowfort cards already in play, but they also have the flexibility to be almost anything else.

Just after a quick skim, I'd recommend dropping Dub for Marchesa's Decree or Hissing Miasma if you want some more defense that causes loss of life.

Immortal Servitude could also be cool as a recursion piece if you need one. Faith's Reward can also help to recover from wipes, since a lot of your creatures are small.

Grave Pact ninth edition is my favorite card. It was the first rare I ever pulled and it does everything a black card should. It rewards you for filling the yard and punishes opponents for doing so. It could only be better if it has 4 black pips instead of 3, not for devotion but because black magic is the best.

Hissing Miasma: I don't think this is the first card strictly with this effect but I do believe it is the first one that only hurt your opponents. I loved running this card. It was too flavorful thinking my opponents creatures may choke to death just to attack me.

Souls of the Faultless: Simple and effective. If you hit me you'll be hitting yourself and only helping me. This guy saved me in plenty of games and made Orzhov my favorite guild.