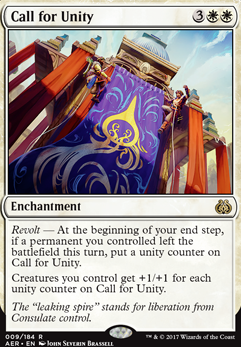 Revolt â At the beginning of your end step, if a permanent you controlled left the battlefield this turn, put a unity counter on Call for Unity.

Creatures you control get +1/+1 for each unity counter on Call for Unity.

Call for Unity occurrence in decks from the last year

Fairies and curses
by TheChaosK 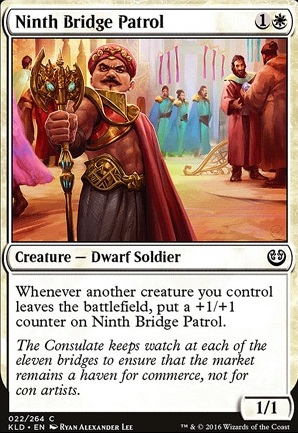 I would cut these cards for more Tutors, Clones, Draws, Counters and Mana Rocks. You are aiming to be a combo deck, but has a few value cards in there that doesn't really fit the idea or simply go in an opposing direction.

As a combo deck, you need to be able to dig your library for the combo pieces and answers. Creature Clones with Felidar offer another way of comboing with Knight and Altar that doesn't need Aminatou, while also being generally useful.

Call for Unity -> Doesn't help your game plan
Future Sight -> 5 mana is a lot, UUU is a lot and you can't abuse this
Scheming Symmetry -> if anyone answers your tutored card, you just gave a free tutor to an opponent
Rite of Replication -> Clone tokens can't combo with Felidar
Finale of Revelation -> Sorcery, you probably won't be paying x=10+
Akroma's Vengeance -> 6 mana for a wipe with no extra is too much, even more so considering you like your mana rocks.
Ashiok, Dream Render -> not having flash hurts this a LOT, while also making you a target for the rest of the table.
Tidehollow Sculler -> discard isn't that great on multiplayer and can't be abused by your usual flickers
Thalia's Lancers -> Too slow for a tutor, few impactful targets
Sphinx of Uthuun -> Flickering this is nice, high CMC isn't
Oona, Queen of the Fae -> Not very useful unless you have infinite mana, which you won't be having most of the time
Cavalier of Gales -> UUU is heavy, payoff is OK
Agent of Treachery -> high CMC
Reliquary Tower -> You don't really need this effect

Eldrazi Displacer -> You have 5 cards that generate Colorless and little ways of tutoring them, will be useless in quite a few matches. Of those 5, 4 are lands, so your chance of comboing with Peregrine Drake are even lower. The card is really strong, I wouldn't cut him, but I would adjust your manabase to have more Colorless sources. The panoramas for example are nice ways of having Colorless sources while still being able to fetch your colored lands.

Out: Approach of the Second Sun <->In: Overwhelming Splendor

@hnewman125 Thank you for the feedback! My group can best be described as Casual with a Competitive budget. Iâm willing to invest the kind of money necessary for cards like Ugin, the Spirit Dragon

, but I prefer to spend that kind of money on exciting cards over functional one. Iâm a Vorthos Timmy, to you Rosewater fans out there.

Nykthos, Shrine to Nyx and Cathars' Crusade are exactly the kind of no-brainers I was looking for. Call for Unity is brilliant, and synergizes so well with self-bounce.

Iâll experiment with Mikaeus, the Lunarch . Being able to return him to hand to recast him bigger has potential.