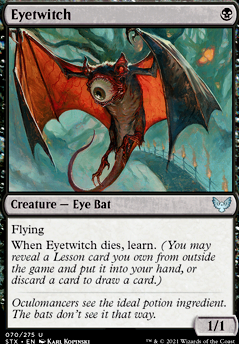 When this dies (is put into the graveyard from the battlefield), learn. (You may reveal a lesson card you own from outside the game and put it into your hand, or discard a card to draw a card.) 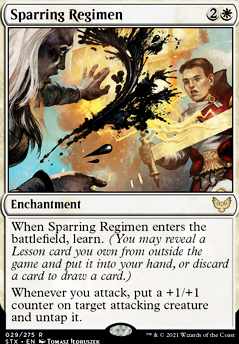 $50 Feast for the Beast
by mobizque 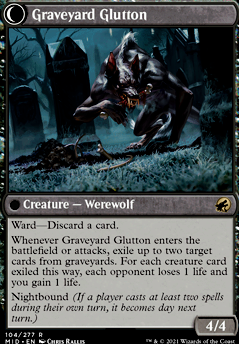 How does this deck beat mono-green? Also, if you have Eyetwitch, you need lessons in your sideboard. Pest Summoning, Basic Conjuration, Containment Breach, and Necrotic Fumes are all decent

The Eyes Have It

Good flavour âÂ love kitchen table casual! I'm was doing the legwork for an eye-themed deck after stumbling across Evil Eye of Orms-by-Gore, so you're helping to give some good leads. There's a new Eyetwitch that could work for a 1-drop, and a Revealing Eye that fits as well.

Hello The_Underdark thank you thatâs another good option! Eyetwitch works well from testing but Iâll also give Shambling Ghast a shot- the extra mana would be useful! Thank you!

Thanks GrimlockVIII! I agree with you completely! I have been struggling with what creature to place in that slot. I have been play testing Eyetwitch and that seems to work well. If you have any suggestions Iâd appreciate it!

Thanks for posting, droslag, and good question. Answer is simple; we arenât interested in the Lessons. We want Eyetwitch to meet a quick demise so that we capitalize on the other portion of his death trigger, the discard/draw effect. The more creatures in our graveyard to exile with Ludevic the better; a dead Eyetwitch plus a creature from our hand gives us a net gain, plus a replacement draw thatâs sure to be of value.

Edit- yup, you nailed it GrimlockVIII. Also, I missed Environmental Sciences while I was building this. I have an app I use while deck building and had set the parameters to search for Lesson cards that were either or ...I forgot about the colorless option. Iâll throw it in the maybeboard for now.

I like this concept but it currently seems a bit out of balance, specifically i think you're too heavy on sac outlets and too light on sac fodder. If my counting is correct, there are 25 total sac outlets but only Kroxa and Claim are providing good sac fodder, outside of big hits from Tend the Pests, so if you don't see Tend early you could have a hard time getting off the ground with your other sac outlets.

Eyetwitch could be a nice cheap creature to fuel your sac outlets, with Pest Summoning and Necrotic Fumes making for good lessons for a sac deck. You could also go harder into the steal strategy by playing The Akroan War in the mainboard; I actually like it better than Claim anyways since it can hit any target and you get an extra turn to figure out how to sac the creature you steal. The one thing about going with more steal effects is that it will probably make your deck more matchup-dependant, as it'll be great against creature decks but could struggle if the opponent doesn't play things worth stealing, so that's why it's nice to have a few of your own things to sac.