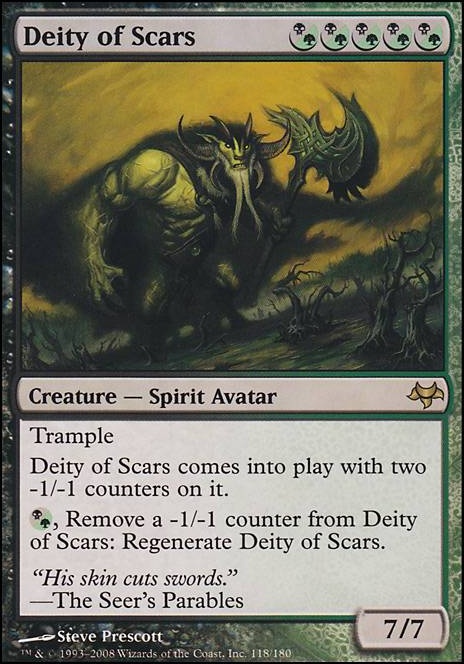 Deity of Scars enters the battlefield with two -1/-1 counters on it.

I wouldn't cut Gary for anything. Deity of Scars is simply a budget Phyrexian Obliterator. Although with the reprint it took a decent drop in price.

The problem with playing Deity of Scars is that if we choose to play him, we are further increasing the curve of the deck, even though he's interesting to play. You could definitely play him as a one of over something like Lashwrithe, or ditch gray merchant and with him as big beater on top.

Any room for Deity of Scars

Lame_Duck on How is Gigantosaurus Even Remotely â¦

While mana:power/toughness ratio is a decent way of quickly assessing the value of a creature, it's far from the only consideration and raw p/t increases suffer from pretty serious diminishing returns. 10 power is good because it'll kill a full health opponent in just 2 hits but with no evasion and no defenses a 10/10 is exactly as good against 1/1s or a Murder as a 5/5 would be, which, given it costs 5 mana, the opponent is reasonably likely to have by that point. Compare it to something like Deity of Scars, which is significantly smaller but is still going to be better in most situations.

Plus, as others have stated, is a drawback.