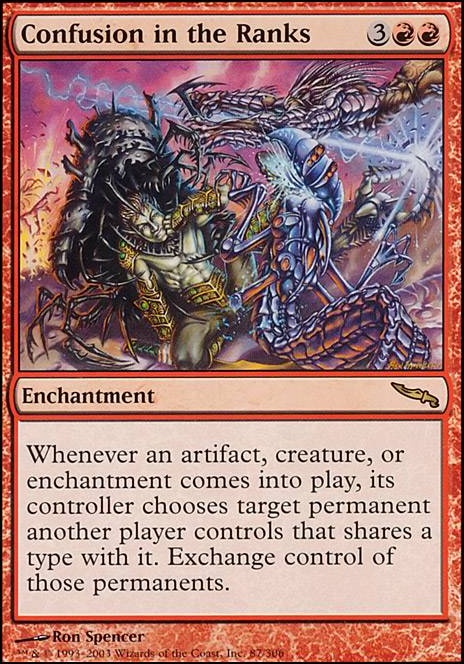 Whenever an artifact, creature, or enchantment enters the battlefield, its controller chooses target permanent another player controls that shares a type with it. Exchange control of those permanents.

Land of Confusion
by ClockworkSwordfish 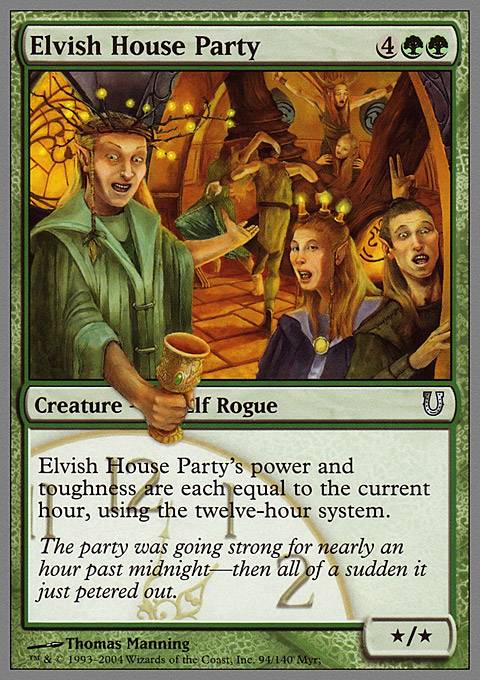 Fat_old_guy, it's still being played, and I keep an eye out for new stuff (mostly new ways to make tokens). I haven't done updates since before Neon dynasty came out because that set had so many fun commanders to build around, but I might try Kami of Celebration for a bit. There's wiggle room to make changes and try new things, so don't feel like you have to stick to the list as is.

The only major changes I'm thinking about are to make room for Karn, the Great Creator and Mycosynth Lattice, but there's no real reason to make the change.

A minor change I may make is adding in a way to copy Glimpse of Tomorrow so that I can potentially do some busted things with Confusion in the Ranks, but this is a very low priority.

This deck is definitely worth trying out.

Confusion in the Ranks doesn't let you trade enchantments and then return the aura to your hand. There is no way to get the activation on the stack under the trigger. When your aura enters the battlefield both Confusion in the Ranks and Chishiro, the Shattered Blade will trigger and you can put the abilities on the stack in the order of your choosing. Only after both triggers have been put on the stack will you receive priority and be able to activate the RTH ability. The creature switch still works and is amusing. You just can't mix triggers and activations in the manner you were wishing.

Confusion in the Ranks is brutal. Here's why.

Cast an aura that has a Return To Hand (RTH) ability.

You create a 2/2 Spirit token.

Now you need to manipulate the stack. Order them like this,

In top-down fashion, 3rd resolves first. You and your opponent exchange creatures. Great way to gain control of their Commander or combo piece

Next, enchantment swaps happen. They get your aura, you get their enchantment if they have one.

Third, if the aura is under their control, your RTH activation resolves and it bounces back to you. You maintain control of their enchantment, but you keep yours ;)

Even if they don't have an enchantment to swap, your RTH activation still resolves. RTH and re-cast.

You get another 2/2, who you swap out for one of theirs - again.

This deck is stupid and I love it

DragonWolf420 also as far as Genesis Chamber is concerned, since it procs every time norin enters the battlefield you are potentially generating 4 myrs per turn rotation. After 5 or so turns you have around 20 power on the board potentially. With Panharmonicon that becomes 40 power, with anything else in play like Sculpting Steel it can make it 80 power. In 5 turns that it pretty significant. Since you will also have that many 1/1 myrs there are lots of ways to take advantage of that like Ashnod's Altar, Tooth and Claw, Purphoros, God of the Forge, anything that generates x/x construct tokens like Urza's Saga, and it makes Confusion in the Ranks better since each myr lets you steal a creature or artifact.

DragonWolf420 Confusion in the Ranks trades creatures with your opponents as an etb effect. Brand returns all creatures you own that your opponents control to you. When norin enters the battlefield he procs confusion in the ranks and trades with an opponents creature. So you get your choice of opponent's creature and they get norin. When anything triggers norin and he exiles himself, he comes back and trades with something else an opponent owns. I'm saying that since confusion in the ranks is the only way that he has to actually have opponents own his things that brand is going to be a dead draw 90+% of the time.

Some cards I have questions about however:

Crucible of Worlds, I only see two lands that you are sacrificing and I don't see a lot of things that put lands in your graveyard. I feel that this is kind of a do nothing card in this deck.

Knowledge Pool, I feel like in order to make this worth it you really need the other cards that lock other people out. It's ok-ish as a chaos card, but there are better cards to cause mayhem at the table.

Reliquary Tower, you don't have a way in the deck to draw a lot of cards. This is another do nothing card.

Krark's Thumb, there are only 3 cards in your deck that deal with coin flips. Is it worth it to use this card?

Altar of the Brood, even if you get this trigger twice a turn with norin and Panharmonicon it's not really doing much. It will actually hurt you if you play this against a graveyard deck that want stuff in the yard anyway.

Brand, you don't have anything other than Confusion in the Ranks that gives opponent stuff, when you use confusion to give norin, when he exiles he comes back to your battlefield anyway. Not sure this is doing much for you.

Worldfire, this card needs a solid strategy to be good. Like protecting your board with Teferi's Protection or something before you cast it. Since norin can't actually do damage since he exiles himself when he attacks, this is kind of a nonbo in this deck.

I feel like you are trying to pull this deck in a lot of different directions all at once. Kind of a jack of all trades master of none problem. I would suggest finding one or two things and work on making everything in the deck synergise with that. I also think that this deck might work better with a different commander, there aren't many cards that actually interact with norin in this deck.

Lastly, you should definitely put Genesis Chamber in this deck. It's way too good with norin not to include.