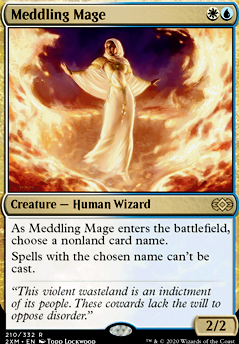 As Meddling Mage enters the battlefield, name a nonland card.

Meddling Mage occurrence in decks from the last year

Further reprints of both Meddling Mage and Vengevine are nice, because they were becoming expensive, but I really wish that Vengevine had been downgraded to a rare, because it is occupying a mythic spot in this set that could be occupied by a better card. How does it make any sense for Sharuum to be downgraded, but not Vengevine, especially since sundering titan is only a regular rare? Also, on that subject, Sneak Attack being a mythic rare is definitely a waste of a mythic spot, as well; why was it not a regular rare?

SynergyBuild on Modern to Commander

bChulane doesn't really go with any of the tempo disruption strategies that Modern Humans has. It really feels like a normal edh creature deck, which just happens to use the same creature type.

Modern Humans is entirely based on Kitesail Freebooter's ability with Meddling Mage to shut out combo decks, Thalia, Guardian of Thraben's ability to slow them down and protect your board, and the Champion of the Parish, Mantis Rider, Thalia's Lieutenant setup to end the game at fast speeds with the otherwise weak hatebears. Adding in the rest of the deck you see that the goal of Humans isn't to combo with humans, but to be an anti-noncreature deck with hatebears, which use Aether Vial to get around counterspells, and then use Cavern of Souls as well as a tribal base just to pump out a bit more damage and consistency in the Modern format.

Drawing cards and playing additional lands as you speed through your deck of creatures isn't Humans, it's much more akin to Legacy Elves.

I agree, Meddling Mage is an enormous prob. Is Dismember in the sideboard gonna be enough?

That idea for Devastating Summons as a build-around is kinda cool, but I think that's its own deck (maybe alt wincon for Dryad-Valakut?).

Anything sorcery-speed is not a problem. My goal is to just blow up and win the turn after I play Reef. Anger of the Gods is tantamount to Lightning Bolt at sorcery speed against my deck.

Damping Sphere destroys me. Good thing nobody plays it right??

Ingot Chewer gets me the Risen Reef triggers. The spree does not. For the same reason, I am considering Shriekmaw over Dismember.

Anyhow, my goal is to be able to compete at an FNM. However, I have no FNM at which to compete, and all of my friends who play Magic were taught by me pretty recently. So yeah, altogether, not ideal.