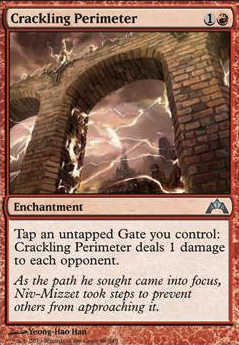 Tap an untapped Gate you control: Crackling Perimeter deals 1 damage to each opponent.

Where the F***k are all my keys?!
by Xelon_The_Woof

Waiting for Golos
by Sheld

The Gates Stay Closed
by ShadowsofChaos 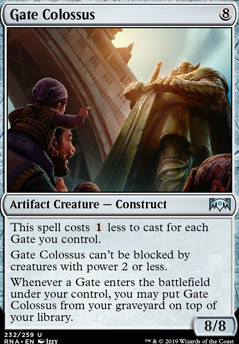 Crackling Perimeter for this maybe?

Thanks. I thought it was a cool wincon back when it was first printed in Dragon's Maze. At the time, it was barely possible to play the deck in standard, until Theros dropped, then it was slightly playable. But I was taking a break from magic at that time.

I removed one Azusa, Lost but Seeking to add Crucible of Worlds . You're right about it helping with land destruction. I'm going to work on the sideboard next.

I added Wear / Tear for some artifact/enchantment answers. Maybe Pull from Eternity would be good in case my opponent is exiling my stuff? The sideboard has a few alternent wincons: Crackling Perimeter , Liliana's Caress , and Underworld Dreams provide ways of dealing damage to my opponents. Melira, Sylvok Outcast protects against infect decks, and combos with Phyrexian Unlife to help me stall out longer in case they're killing me too quickly. I even thought about Platinum Angel but 7 is a high cmc. Maybe it would be worth it anyway?

I have always been enthralled by the idea of a gate deck, and this one pretty much sums up how I would do it for casual. I understand that you have probably seen most of these, if not all of these cards, but you might want to check out Crackling Perimeter , which pairs with Wilderness Reclamation beautifully, Hold the Gates which is one of my favorite cards simply for the vigilance it provides. I might run one or two of Gateway Sneak for card draw, or if you play with a group that runs burn, Saruli Gatekeepers .

Some cards I think would do well here.

Let me know if you need help with cuts.

I really like the Honden cycle, Tatyova, Benthic Druid , Reki, the History of Kamigawa , Crackling Perimeter , and a lot of the new stuff like Guild Summit , Wilderness Reclamation and Plaza of Harmony

Nim Deathmantle seems out of place. It's because you're running a lot of boardwipes (so is everyone else); and hopefully you're going to have a lot of mana ?

No Tempt with Discovery ? It gets any land. I guess it's a little over costed unless you're in a big group game. I try to never give in to someone else's tempt ;)

What do you think about Bring to Light , Maelstrom Nexus , Maelstrom Archangel , Demonic Tutor , etc? They're not legendary but are good. Maybe Yidris, Maelstrom Wielder , Thrasios, Triton Hero and Azusa, Lost but Seeking to really drop some CA$H XD

My run in the Maze.

Been years since I've looked at this deck. I actually re-made my Guildgate deck when this set was released as well. Guild Summit and Gateway Plaza were too good to pass up. Here's my updated deck list if you're interested in checking it out.

I'd start by saying that the following cards aren't doing much for you: Path to Exile, Remand, Silence, Sphinx's Revelation, Gatecreeper Vine.

You really need to decide if you want to go the turbo fog route. If you do, go all-in on it. If you don't, then don't run any fogs and go full control. I happen to think that full turbo fog is the way to go with gates, but it can be run either way. Anything in the middle will give you a mixed bag of tricks that you won't be able to use very well.

Running 1x-2x Crackling Perimeter gives you a great secondary win-con, in case your Maze's End gets somehow removed from the game. I've found that Terminus works really well as a board wipe, as you can get the low CMC cast for practically free, and 6 mana isn't too much for a stalling deck in case you can't use the miracle cost. I've also found a ton of success running 2x Primeval Titan. If you've got 6 gates in play, the turn you cast it you get 2 more, then the next turn you swing and win because you'll have all 10 gates in play. Really speeds up the game plan.

Guild Summit is so good man, you want 4. It's your main draw condition, and it can turn a single land play into a chain that draws you several cards if you've got things like Rites of Flourishing or Azusa, Lost but Seeking in play. I run 4x Guild Summit and 4x Rites of Flourishing and it works really well, the two synergize off each-other and both speed up the deck massively.

I tend to play multi-player games more often than 1v1. If you're in a similar boat, then running 2-4x Isochron Scepter can really add longevity to the deck, help you survive against multiple players, etc. Really great when paired with 12x fog effects, as you can always have access to a fog to use. Speaking of fogs, I'd recommend checking out Dawn Charm and Respite. Dawn Charm stops attacks directed to your face, as well as fogging when needed. Respite gives you life every time you use it, adding to your longevity in the game. Both pair extremely well with Isochron Scepter at two CMC.

You really need a way to recover your destroyed lands. The method I've chosen to use is just running 2x Elixir of Immortality. This gains me life when cast and cycles any destroyed Gates back into my library. Since I use Elixirs, this allows me to only run 1x of each gate (with the exception of Gateway Plaza and Selesnya Guildgate as those tap for my main colors). Really makes the land base easier, and makes searching for gates 10000x easier.

Anyways, just was following your deck from a couple years ago and got notified that someone commented. Figured that I'd give my two cents again, since more cards were released for this arch-type. Good luck with your Maze's End deck!