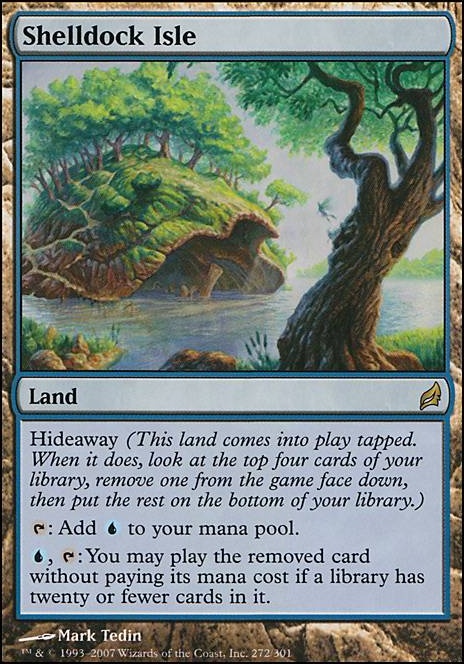 Hideaway (This enters the battlefield tapped. When this does, look at the top four cards of your library, exile one face down, then put the rest on the bottom of your library.)

, : You may play the exiled card without paying its mana cost if a library has twenty or fewer cards in it. 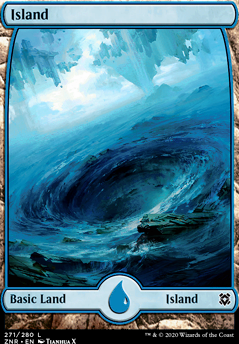 Those are all great suggestions Corrosive_Cat! I did actually originally plan on putting Subtlety in, but just decided not to. Maybe I can try running a couple and play test it to see how it is. I think Masked Vandal is an excellent sideboard card, so I'm definitely going to put some in the sideboard!

I also really like the land suggestions, however I think with Mosswort Bridge and Shelldock Isle that I already have too many lands that enter tapped, but I'll consider them, and I thought about using Endless Sands but realized ultimately it doesn't really do anything in this deck.

Commandeer and Subtlety are good exile outlets, and Endless Sands and Mosswort Bridge // Shelldock Isle could be cool too! And Masked Vandal would make a stunning sideboard card.

abbatromebone on Help with my landfall deck

1) fetchlands dont have to grab basics they can grab shock lands like Breeding Pool 2) you have a way to get artifacts from the graveyard to the battlefield so I would recommend crucible of worlds. 3) have you considered Ghost Quarter + Archive Trap as part of your deck? Its pretty good. or Field of Ruin 4) generally good cards in this deck to think about Visions of Beyond Fractured Sanity Tasha's Hideous Laughter Into the Story Oboro, Palace in the Clouds Shelldock Isle

Wow, I've taken a lot of inspiration from this list! I have a less competitive list that revolves around the crabs and Phenax for mill, Creepy Crawly Library Removal [Phenax Mill]. I can't afford a playset of Archive Trap yet but I definitely want to get my hands on Shelldock Isle , didn't know that existed until now! The Field of Ruin is a great idea I hadn't thought of too.

Archive Trap is the best mill card in the deck, almost every deck in Modern plays fetchlands, would definitely keep 4 copies. Plus Field of Ruin can make them search.

I would make room for some Drown in the Loch or Fatal Push . Gonna need to kill Monastery Swiftspear , Soul-Scar Mage , and Sprite Dragon early cause they can kill you quick.

Iâve also seen a lot of people run Shelldock Isle . Can get you a free Archive Trap or something later on.

I can see Shelldock Isle being particularly deadly if it has an Archive Trap stored as a powerful finish to an opponent, especially if you have a Breaking or better in your hand. If you can force your opponent to search their library, then other mill cards should damage them beyond recovery. As for stuff like Emrakul, the Aeons Torn, as long as you can reliably exile them while they're in the library, they're harmless, as very few cards can recover cards that were exiled by other things. Any Emrakuls in an opponent's hand are much easier to deal with, as more cards exist that can deal with those.