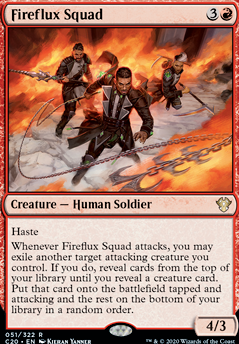 Whenever Fireflux Squad attacks, you may exile another target attacking creature you control. If you do, reveal cards from the top of your library until you reveal a creature card. Put that card onto the battlefield tapped and attacking and the rest on the bottom of your library in a random order.

Oh dang, awesome suggestions. I didn't even know about Fireflux Squad. I'll look through this and see what I can add/remove. Thanks my dude.

Help us Isshin, you're our last hope!

I can't recommend Fireflux Squad enough. Exile a token and vomit out pure gas the turn it enters thanks to haste... twice.