This deck's strategy it to win with an Ezuri, Renegade Leader and/or Joraga Warcaller and attack. This deck has problems getting damage close to 20, it deals more like 200. There are never enough Elvish Archdruids in a deck, so Elvish Harbinger can be use to fetch Ezuri, Renegade Leader, Elvish Promenade , Elvish Archdruid, or the other main wincon, Joraga Warcaller. Heritage Druid makes the most out of a huge Elvish Promenade or Genesis Wave. Immaculate Magistrate combos well with Joraga Warcaller to make the 1/1 elves much bigger. Mana dorks like Llanowar Elves guarantee that you have enough mana to continue you game plan even if you run out of lands fast. With this deck, I expect to win about turn 4, 5, or 6 without major disturbances disturbances like Supreme Verdict or other wrath spells. Ezuri, Renegade Leader and Asceticism are here to help negate the effects of these.

I would appreciate comments with cards to make the deck better without making it too much more expensive. For example, I don't want lots of people saying "Use 3x Gaea's Cradle and make it legacy"

While playing with this deck in real life, it sometimes loses to burn decks that just kill my mana dorks, so I sided in Vines of Vastwood and Asceticism for the hexproof, although Asceticism is decent (as mentioned above) against board wipes. Genesis Wave is also a major wincon. I have attacked for 10,000+ on turn 5 with 38 attackers with trample. To make the most of it, I put Craterhoof Behemoth in the sideboard. I've learned never to tap out for a huge Joraga Warcaller because one counterspell later I am wide open for an attack.

Note: Assume I am tapping all my Forests each turn. 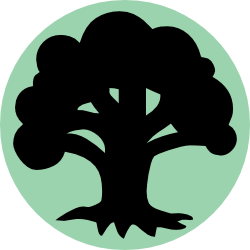 Llanowar Elves, Elvish Mystic, Arbor Elf: They all serve the same purpose in this deck and allow for a turn 2 Elvish Archdruid

Elvish Archdruid: A major ramper, also gives all the elves +1/+1

Elvish Harbinger : Ramps a little, but the main purpose is to get Elvish Archdruid or a wincon

Ezuri, Renegade Leader: Another wincon, and it can save some guys from burn or boardwipes

Elvish Promenade : Can get pretty crazy and allows for massive amounts of damage, can produce mana to pay for itself with Heritage Druid

Heritage Druid: Allows me to empty my hand very fast, ideally on turn 3 Forest: A staple in all elf decks Cavern of Souls: This is basically a strictly better Forest in this deck, since there are only 4 cards in this deck that are not creatures, and by then it won't matter that it is one colorless.

Gaea's Herald : Only to be used against Counterspell decks, saves Elvish Archdruid and other important creatures. I might take it out Back to Nature: Kills all those annoying enchantments such as Worship that I have no way of getting around

Asceticism: Serves about half the purpose of both Ezuri, Renegade Leader and Vines of Vastwood, hexproof and regeneration

Took out Craterhoof Behemoth for Gaea's Herald. It really had no place in this deck and was pretty much just a win-more in this deck. Also took out Vines of Vastwood. It was hard to keep the G open when I expected a burn spell and it only delayed them a little and me a lot.