Creature tokens you control have haste.

At the beginning of combat on your turn, create a 2/1 blue Myr Artifict creature token. Then you may choose a token you control. If you do, each other token you control becomes a copy of that token. 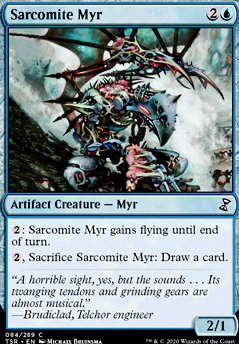 Tana of a Thousand Faces
by Isaac_Fynn

Sharing = Caring with Zedruu
by PartyJ

Other clones maybe. Quicksilver Gargantuan is a clone and counts as a huge vial to smash.

I would consider some more token copy spells and throw in Brudiclad, Telchor Engineer . The chance to have a DOZEN Vial smashers is pretty funny.

Mirror Gallery would lend some redundancy but its kinda pricey now.

It should be noted that when Brudiclad, Telchor Engineer changes all your tokens to copies Inferno Titan , it does not trigger the ETB triggered ability of Inferno Titan . The tokens were already on the battlefield and did not enter.

So in the above stated scenario, barring any other interactions, you would only get an additional Inferno Titan (originally the 2/1 blue myr token that was changed by Mystic Reflection ).

Sultai_Sir on What Commanders Are You Excited â¦

Strixhaven/Commander 2021 are both fully spoiled, and I'm really excited. The generals I have an eye on are Osgir, the Reconstructor because we finally get an artifact sac outlet in the command zone and some sort of 5-color Brudiclad, Telchor Engineer deck starring Adrix and Nev, Twincasters because it's a cheaper, monetarily speaking, Parallel Lives , which is checks notes: 51 dollars? Jesus, someone reprint that. So, which ones are you planning on building? Let me know, and we can brew together!

Mystic Reflection creates a replacement effect when it resolves. Replacement effects do not use the stack and simply modify an event. Brudiclad, Telchor Engineer attempts to make a 2/1 Myr token. The token enters as a copy of Inferno Titan because of the Mystic Reflection replacement effect. Brudiclad, Telchor Engineer then allows you to make all of your tokens a copy of one of your tokens and the new Inferno Titan token is a valid choice for this part of the ability.

Lets say I have a Inferno Titan and Brudiclad, Telchor Engineer in play. If I cast Mystic Reflection targetting the Inferno Titan while Brudiclad's trigger is on the stack, can I change all my Tokens to Inferno Titan ?

Oversimplify: I think everyone here knows my feelings on these kind of effects at this point.

Ruxa, Patient Professor: Cute, even if I never personally cared about vanilla tribal.

Fractal Harness: It's neat that the pseudo-Living Weapon part is basically optional since the token will be dead on arrival if you go with X = 0. Obviously another toy for Skullbriar, the Walking Grave . If I got it right, this will trigger Ezuri, Claw of Progress regardless of the value of X, which makes it extra neat for him

Theoretical Duplication: Oof. I doubt you'll get more than one batch of tokens out of this, but basically silencing all Creature spells (and Creature cheating) after the first thing you plagiarize is pretty good too. Brudiclad, Telchor Engineer got another toy in addition to Rionya, Fire Dancer

Spawning Kraken: This could have been a seafood commander in its own right, which makes me think that's something they're going to release relatively soon

Replication Technique: This seems way better than Creative Technique ; you can come to an agreement over what's copied, making it way more predictable

Esix, Fractal Bloom: Spooky art; more what I had in mind when I heard about the creature type. Anyway, Avenger of Zendikar obviously curves nicely from this, probably intentionally so. Note that it doesn't restrict you to copying just your own creatures.