Hello everyone! This is Pattern Recognition, TappedOut.Net's longest running article series as written by myself, berryjon. I am something of an Old Fogey who has been around the block quite a few times where Magic is concerned, as as such, I use this series to talk about the various aspects of this game, be it deck design, card construction, mechanics chat, in-universe characters and history. Or whatever happens to cross my mind this week. Please, feel free to dissent in the comments below the article, add suggestions or just plain correct me! I am a Smart Ass , so I can take it.

Suggested Listening for this article. Not a RickRoll, I promise.

Of all the creature types in the game, only this one has seen as many revisions, both mechanical and flavour over the course of the game. While other tribes tend to have a good identity and stick to it, Walls are a creature type that has been with us since the beginning, got removed, had their rules changed, then brought back better than ever.

Of these, Some of you with better memories may recall which of these I still love as a card.

Anyway, Walls has two things in common. First was their creature type - Wall, obviously, and second was that they were very cheap, usually having far greater toughness than power, culminating in Wall of Stone , for a 0/8. The last time I saw a creature like that was Erratic Cyclops !

But while the latter is certainly something of a trait when dealing with Wall Tribal, there are some exceptions to the rule. Of the ... 134 Walls in the game at this point, only 10 have power equal to, or greater than their toughness.

But that's not the real thing that made walls stand out. You see, for the first decade or so of the game's existence, Walls were the only creature type to have rules baked into them. You see, it was hard-coded into the game that Walls cannot attack. Sure, there was occasional reminder text on the card, but Walls were the only creature type with rules attached to them.

It was a kludge, sad to say. Not really a good way to implement the idea, but it worked for the most part as a legacy rule to the game.

You see, Walls are very much a reactive creature type, and often wouldn't be seen as creatures at all except as defined by the rules for the most part. Unlike Fire Elemental , which is obviously a creature, was sort of creature was a Wall of Fire ? I mean, aside from a Firebreathing one. This became more and more of an issue as the game progressed. Walls kept being printed, but how to you justify a Wall as a Creature?

Given everything else in the game, I don't see it as an issue, but then again, I'm speaking with 20+ years of experience. I've played with Walls, and done neat things with them. But hey, I've made no secret of my Old Fogey-ness!

Walls happened and they stayed happening, showing up regularly until 8th Edition, where upon the decision was made to stop making Walls for a few reasons. The first reason was the flavor above, as Wizards found that justifying purely reactive creatures that just sat there doing nothing except block was harder to do, despite adding interesting abilities to them. Second, as part of the general overhaul of the game, there was a concerted effort to create more aggressive creatures and Walls didn't fit in with that because all they did was stall/delay the game and prevent resolution - something that Wizards was loathe to embrace as they wanted faster games, not slower ones.

However, salvation for Walls came in Champions of Kamigawa. This was the set that codified and entered into the game's lexicon, the Evergreen keyword of Defender. This keyword means that the creature with it cannot attack, and this was something that could be applied to anything that didn't attack, or wouldn't go out and fight. While the rules change was made in Champions, the first cards printed with it were in the next set, with Traproot Kami and Opal-Eye, Konda's Yojimbo .

But the important part of this change was that Walls were errated. No longer was there a rule stapled to the creature type, but rather the change was "All Walls now have Defender. Not all Defenders are Walls."

This simple change took time to percolate through the game as players and Wizards got used to the idea of creatures that could just sit at home and not attack. But in the end, Walls came back in 10th Edition with Angelic Wall , Wall of Air , Wall of Fire , Wall of Swords and Wall of Wood . Yes, got no Walls, and doubled up. Live with it. Walls were no longer envisioned as something that had to be justified in getting in the way of things one people accepted that they were there to, quite literally, [i]hide behind[/i]. Of course, they would no longer get the same degree of printings in sets like Alpha (with 10) and Legends (with 11!). But they were not considered somewhere between Evergreen and Deciduous in terms of showing up in sets, or between a 1 and a 2 on the Beeble scale. To whit, there were no Walls in the most recent set (as of this printing), Kaldheim. But in the previous set, Zendikar Rising, we got the solitary Tuktuk Rubblefort .

The one that they both agreed on was Wall of Denial . 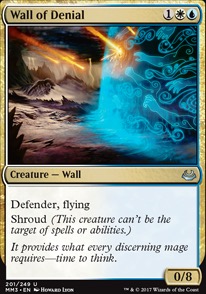 First printed in Shards of Alara, this Wall was pretty much the Last Word in Walls. Untargettable thanks to Shroud, it was a cheap flyer that couldn't be killed without excessive amounts of Power or an unsubtle board wipe. They both liked it as something that could handle the worst that could be thrown at it, and come back for more. And did I mention it was cheap? Because it is!

Next was Wall of Blossoms and Wall of Omens . 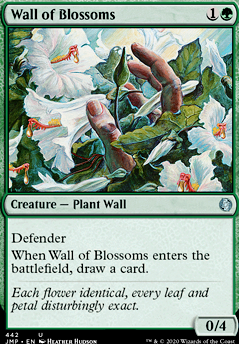 These two Walls were cheap (on mana) Walls that, more importantly, drew a card when they entered the Battlefield. The one was more important as it proved to be a readily reliable Flicker target in order to draw more cards in that colour, especially when the deck didn't delve into for pure draw or more flicker effects and targets.

Seriously, when this card is a good one for because of its effect, something needs to be shaken loose and fixed.

Suspicious Bookcase gets a nod for being absolutely on-point with the flavor. 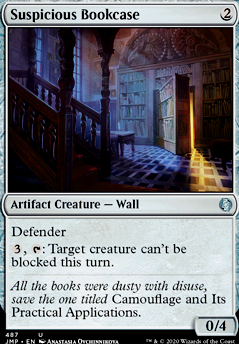 As naturally, anyone with even an ounce of literary appreciation can appreciate the notion of the 'hidden passage' inside the book case. A bookcase that can protect you, then when you're ready, you can send someone out from behind it and they can do their thing without being seen or caught because no one was there to defend from them!

Seriously, an artifact that can make a creature unblockable for the lost cost of ? And is still as 0/4 for ? This is a seriously useful card against aggro decks, as well as Voltron styled ones as it's another source of reliable damage. 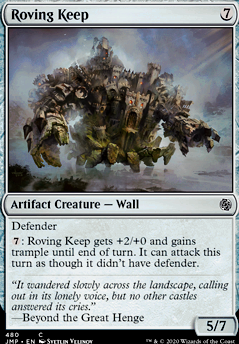 Roving Keep gets a nod as well for being a walking castle, a defensive fortification that can come in, sit down, and be just a plain old 5/7. But when you want to, it turns into a 7/7 with Trample!

I mean, sure, a 7/7 with Trample isn't that hard to come by, but I mean, would you rather have this or Mage-Ring Responder ? Or Duskdale Wurm or Guardian of Ages...?

Look, what I'm saying is that hitting someone's face with your Castle is awesome, and should always be the correct choice.

Then we get Overgrown Battlement 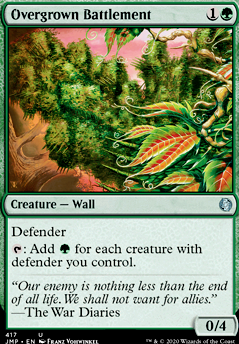 This Wall is, just by itself, a very tough mana dork that you can tap for , but then you realize that it counts not just itself, not just Walls, but rather, each creature with Defender that you control. Two of these guys in play? That's . Add in, say, Wall of Blossoms , Wall of Vines or even Tinder Wall , and it becomes very hard to punch through the first layer of defenses while at the same time generating obscene amounts of mana advantage. 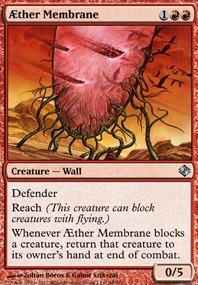 AEther Membrane gets our props for being a giant trampoline being held on its side, and thanks to it being from Planar Chaos, is one of a very few sources of based creature bounce.

There were others, of course, but I do have other things to talk about. Let's talk about Rolling Stones and Animate Wall . Oh, and while we're on-colour, High Alert .

The thing about attacking walls is that you need to get around their Defender ability, and for the most part that's actually pretty easy to come by, especially when Walls are on the upswing. Pun not intended of course. The other problem of course is that Walls tend to have low power, if non-existent in the first place, so they don't do much damage. Thus, you get High Alert , Arcades, the Strategist and Doran, the Siege Tower that bypass this by letting you assign damage based on the Toughness, rather than the power of the creature.

Walls are cheap, and they are effective at what they do - slow down the game, holding back a runaway agro deck, providing resources on the cheap, that sort of thing. They have a place in the game, and I'm glad they aren't as ubiquitous now as they were back when I first played the game. They provide cover, pure and simple.

I like them, and look forward to seeing them again. Just remember though, if they get too far out of hand, there is dedicated anti-Wall cards in the game, from Tunnel to Word of Blasting to the far more recent Blow Your House Down . After all, it's not every Tribe that gets that sort of direct counter to them. Just the cool ones.

Join me next week when I talk about something else. What? I don't know yet. You can also suggest topics below.

One of my friends used to have a changeling deck. We all knew that changelings could attack, but it ended up being confusing that changelings were technically walls, and normally walls can't attack. I'm glad Defender was introduced to fix this problem, otherwise changelings would have been pretty much unusable.

Speaking of Defender, another one of my friends had a nasty defender deck based around Overgrown Battlement and Axebane Guardian . With multiple copies of these two cards he had insane mana to summon Colossus of Akros

I'm surprised you didn't take a moment to mention cards like Mistform Ultimus , Ageless Sentinels and Mistform Wall that distinctly play with the Walls-can't-attack rule, and cards like Imagecrafter and Unnatural Selection that purposefully sidestep it.

You missed a spot. Walls as creatures should have had a happy reference to the Necrite (I think) from Fallen Empires. One of the multiple pictures had flavor text about "have you ever seen something scare a WALL to death?"

As a tangentially related question, what would make a wall legendary? In the game, there's only Pramikon, Sky Rampart

, which appears to be essentially magical. On Earth, we have, off the top of my head, the Great Wall of China, the Berlin Wall, the Walls of Jericho, and the Walls of Constantinople. There's probably more. Does any plane have any big, important barriers like this? Great Wall , maybe, conveniently laid across the Aysen Highway .

I'm surprised you didn't mention Charix, the Raging Isle in your opening statement where you talked about Erratic Cyclops .