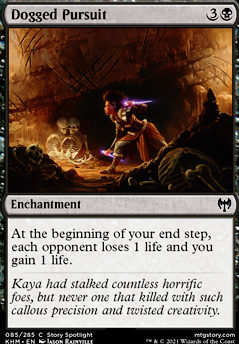 Just wanted to drain my friends using my favorite color

My friends and I wanted to make some casual pauper decks with spare cardboard we've accumulated over the years. My favorite mechanic is draining, and with both Ill-Gotten Inheritance and Dogged Pursuit being commons, I decided to make a deck based on enchantments and draining! Link to the deck

The goal of these cards is to stay on the board and slowly drain out the opponent. They also act a little bit as defense to keep my life total up

Ill-Gotten Inheritance -- I love this card so much. I think that cashing in on the 4-life swing can catch people by surprise

Dogged Pursuit - Same as Ill-Gotten Inheritance, but you don't have to wait until your next turn for it to occur

The goal of these cards is to act as removal or, if they stick around, add to devotion count for Gary

Withercrown - Either drain them over time or get them to sac

Paralyze - It's not pacifism, but it'll really help the rough early game

These guys drain either on ETB, on attack, or by sacrificing. They'll help keep the board state safe so the slower enchantments can do their job

Kalastria Healer - They and Vampire Envoys synergize to drain on ETB

Vampire Envoy - See above. Also, 1/4 flying makes for a nice blocker if needed, or it can go on the offensive and get in 1 guaranteed ping

Epicure of Blood doesn't drain on his own, but buffs drains so enchantments double ping

Standard Swamps, I decided to add witch's cottage since it will rarely need to come in tapped due to the deck being mono-colored. Makes up for the lack of creatures and draw.

Stab Wound - Cool that it drains and doesn't have the opportunity to sac like Withercrown, but just -2/-2 for 3 mana is tough.

Pharika's Chosen / Hired Poisoner - Originally took the spot of Paralyze to provide early-game defense, but I'd rather have the repeatable effect of Paralyze. Can be added in to replace high-mana cards if opponent is super agro.

Epicure of Blood - Two seems like the right number to have, but theres a third for longer, durdlier games

Herald of Hadar - Super cute card, not sure how practical it is to be spending 6 mana on a 5 mana card to draining 2.

Murder - I really wanted to just use creatures and enchantments, but murder is here for any ridiculousness

Sorcerer of the Fang - Early-enough body for repeatable drain later, but I figured I'd be wanting to use that mana somewhere else, and keeping it on the field that long is questionable.

Skymarch Bloodletter - If I need more bodies for some reason