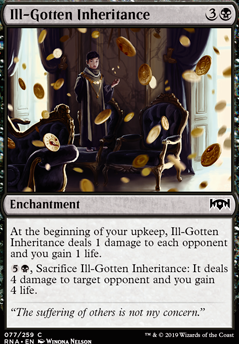 At the beginning of your upkeep, Ill-Gotten Inheritance deals 1 damage to each opponent and you gain 1 life.

, Sacrifice Ill-Gotten Inheritance: It deals 4 damage to target opponent and you gain 4 life.

Ill-Gotten Inheritance occurrence in decks from the last year

Kambal Didn't Kill Himself
by crazymug37 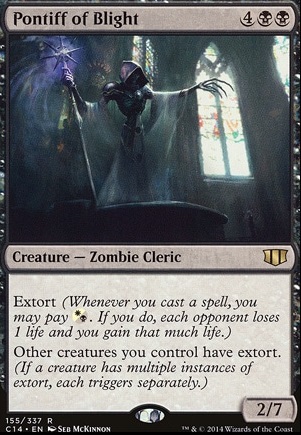 Sorin, Vengeful Bloodlord was in the deck from the beginning. Ajani, Strength of the Pride and Gideon Blackblade are a little bit to expansive ($$) for my budget, but I considered them before I completed deck and in my opinion, Sorin better suits the assumptions (lifelink for my creatures (in my turn), -X resurrection from graveyard, +2 damage with lifelink == another counter for creatures. My main assumption is gaining life (from lifelink, Soulmender ) to trigger Epicure of Blood , which cooperates perfectly with Ill-Gotten Inheritance and Revenge of Ravens -> Ajani, Strength of the Pride doesn't work well enough with this set. Btw sometimes I don't even have to attack, to win the game. Other creatures in my opinion are perfectly compatible with themselves.

Gideon's Company is very good card, but I decided to change it for Bloodthirsty Aerialist . It has flying, which is good way to deal damage, when opponent doesn't have any flying creatures / or to defend flying attackers.

Now I'm trying to change some lands to speed up an avalanche of 'counters'/'triggers'. ;)

I'd recommend a lot of the changes I recommended over on Esper Lifedrain.

Fabled Passage instead of Evolving Wilds , Murderous Rider instead of Murder , more Revenge of Ravens instead of Ill-Gotten Inheritance , take out Witch's Cottage (and in this case probably Forever Young since it takes away so many of your own draws), and consider adding Clackbridge Troll .

Good idea, but needs refinement. Tempting Witch and Giant's Skewer work well enough together, but it's not really what you need here and it's unreliable and mana-heavy. I'd recommend cutting them along with Ill-Gotten Inheritance and Vantress Gargoyle , who are both underpowered. Negate doesn't fit with your theme. Patient Rebuilding is no longer standard-legal. Witch's Cottage will just be a tapped swamp most of the time. Replace Evolving Wilds with Fabled Passage .

Now, with all these cuts we need some cards to add. Put in some more Revenge of Ravens to discourage attacking and get you more lifegain and time to drain, Cauldron Familiar fits into this deck well, Murderous Rider gives you a better kill spell than Murder (which means you might take that out too) as well as some lifegain. Consider Clackbridge Troll , who I think is massively underused in this format, and gives you some cards and life at the least.

Right now I think this format is harsh on this archetype, with all the aggro and midrange around, but mess around and find some strategies that work. I'd recommend switching blue to green, since there's plenty of green cards that'll help this deck ( Moldervine Reclamation for instance) and not much blue.

moxxem yeah it seems to be much removal, but this is also the core of the deckidea, so I don't think that I will reduce them. Finale of Eternity worked quite well for me, like removing 3 small creatures, or something comparable. Most of the time I got the mana to do so and Cry of the Carnarium did not work, because most decks I see, use creatures with thoughness 1 or 3+ and I can cover that with other cards, while Cry of the Carnarium is dead in my hand. And as I don't focus on faceburn, I can on only trigger spectacle with Ill-Gotten Inheritance and Chandra, Awakened Inferno most of the time. So Drill Bit etc. seem to be nice, but won't work smooth for me... |||||||||||||||||||||||||--------------> The biggest problem of this deck seems to be, that I can't do anything about enchantments. Maybe I will have to change that after including Theater of Horrors .

I 100% agree with cutting Zealots. I understand it feels bad on T8 when you run out of gas, but there are plenty of other ways to generate Card Advantage without drawing cards. Graveyard Marshal , Midnight Reaper , and Isareth the Awakener come to mind although none of them are "vampires" so prolly not the most optimal fit. Maybe Oathsworn Vampire could fit a similar role... MAYBE

Prison Realm would be an excellent upgrade over Luminous Bonds It takes creatures with passive abilities completely off the board has the added benefit of hitting walkers and the scry can help setup your next draw.

Radiant Destiny and Vanquisher's Banner are both solid Anthem Effects you could look at. Likewise Unbreakable Formation if cast as a Sorcery leaves counters behind.

All in all there is only so far you can take a deck like this and I would be careful investing too much cash-ola. The deck seems to be suffering from a bit of an identity crisis.

What store are you doing the FNM thing at? Maybe i could swing by.

ok i see what you are saying, i have the Sorin, Vengeful Bloodlord but don't have the oath. i had no clue on the conclave tribunal. nice! i did pretty dece with it on fnm but i need to update i removed the zelots and the champion i thought they slowed down the deck but i was sitting there turn 8 with no cards in hand. really bad situation. i need to get her going quick or build up a solid defense. i tried Ill-Gotten Inheritance and used it as a win a few times but i think it is more of a side board card. thank you for the tips man