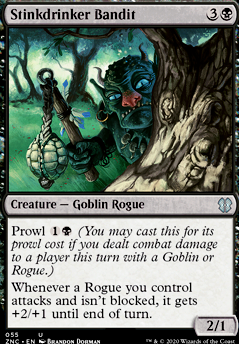 Prowl (You may cast this for its prowl cost if you dealt combat damage to a player this turn with a Goblin or Rogue.)

Whenever a Rogue you control attacks and isn't blocked, it gets +2/+1 until end of turn.

Stinkdrinker Bandit occurrence in decks from the last year

The_Legionarre thanks for the feedback!

I understand where you're coming from. I'm gonna try a few variantions of the deck. Right now I'm more after tempo than control or aggro, and having that T1 creature with a relevant type and built-in evasion shouldn't be underestimated with Soaring Thought-Thief and Stinkdrinker Bandit threatening as early as T2. The draw is incidental mostly, but valuable when it happens - which is why I'm currently playing Miscreant over removal, cantrips, and Slither Blade. I've had people bolt/path/push a Miscreant on the board with another on the stack because they overestimate the tempo I get from drawing the card - which protects my other valuable creatures.

I definitely bought extra copies of DitL and Remand for future testing though. I imagine Rogues are gonna get more tech over the coming year as well so this lost could be totally different next year!

Yes, it's a bit slow. It comes down on Turn 4 and gives you value from Turn 5 onwards. You might want to make the deck a bit faster; your creatures are quite fragile and don't do well in combat (most of them have only 1 toughness without buffs), your best hope is to win by Turn 5 or 6 I reckon? So you might want to drop the Oil, the random planeswalker, the 6-drop, and play more Stinkdrinker Bandit and Changeling Outcast (from an above comment).

I think two copies of Bitterblossom is right for this deck. My logic is this: Bitterblossom is the type of card that benefits from long games since it can pile up value, but it's really slow. Your removal package isn't good enough to keep you going into the late game and BB is worse than a card that gives you an immediate body when you get the Stinkdrinker Bandit hands, so you don't want to draw it every game. Plus, you have 4 Thieves' Fortune to Impulse through your deck when you do need it, so going down to 2 will cut down on the clunky hands with minimal downside.

But to be honest, that's just a gut feeling. This is coming from a person who's been playing Faerie Rogue Tribal pretty much since he got into magic though so there's that. Fun deck!

I really don't think you need 4 Tetsuko Umezawa, Fugitive . Her only purpose in the deck seems to be that she helps Stinkdrinker Bandit be unblockable and that she is a rogue. Which, admittedly, is good in this deck.

But fact is that she is a legendary creature, and you can only have 1 of those at a time. Each Tetsuko you draw after the first is a dead draw.

Surely you can find another rogue that can replace 2 copies of Tetsuko?