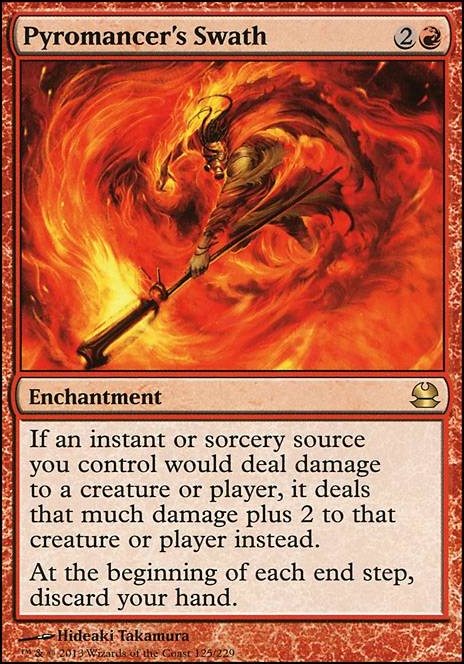 At end of turn, discard your hand. 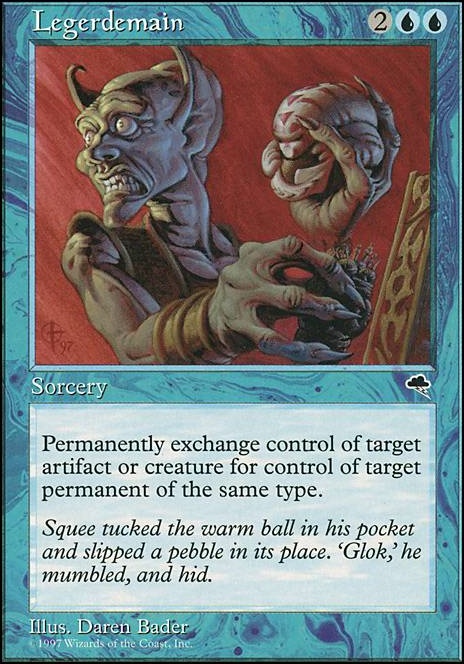 Be Nice For Once

King Saproling, you might be right about Starke of Rath . Spark Double is a good idea. I had Fractured Identity in the list, but took it out because I don't own the token. I don't see the point of Angel's Trumpet because I don't want to take the Stax approach to Zedruu. I have seen other people spend nearly half an hour choosing targets for Overwhelming Splendor . It seems great! I'm swapping Starke for Pyromancer's Swath ASAP.

Be Nice For Once

Starke of Rath seems reeeeal risky. My guess is whoever gets him will kill Zedruu.

I made a similar deck a while back based on the Ensnaring Bridge / Pyromancer's Swath interaction. It also work well with Flame Jab , as when you're in top deck mode, even your lands aren't dead drops; they're Lightning Bolts!!

A great include would be Pyromancer's Gauntlet , Pyromancer's Goggles , and Embermaw Hellion . They would boost your damage and double some of the burn spells. If you want a bit more chaos, take a look at Lightning Storm or Pyromancer's Swath . The Flame of Keld could also be interesting if you can have a burn spell or two in the four cards you get from casting it.

Sorry to keep flooding your deck page with responses but you keep bringing up great points! mono-b has a HUGE problem with artifacts as it's not really the best color for dealing with them. My sideboard for mono-b aggro includes things like Ratchet Bomb to try and mitigate artifacts. sometimes you gotta try and splash red or green for those juicy Nature's Claim or Beast Within or Shattering Spree turns in this kind of deck. Once you get hit with Ensnaring Bridge + jank like Howling Mine + Pyromancer's Swath + Flame Jab stuff once you feel compelled to have something there to stop it lol.

Edit: But yeah Smallpox is fantastic against alot of decks. Plus as an aggro deck you don't care as much about losing a land as your opponent does! Fantastic card.

Hey xStormyx, thanks for your suggestions. My deck is still in its early stage, in fact I just had my first game with it yesterday.

White counterspells seem odd for some but it can save your army against mass removal. This is my priority in my playgroup since there are a lot of control.

Fire covenant is in playtesting, I like the idea of removing lots of threats early on without having to wipe my own army.

So yeah, yesterday I played against:

Omnath, Locus of Rage still not fully optimised but could do awefull things

My deck got out of control very early on, Sanctum Seeker and Mana Echoes did the most in that game. I got to 170ish life and looked very dangerous with board presence to all even Talrand with his control spells.

Unfortunatly I got screwed by tax effects of the Zedruu player. He went for a mass land removal, then mass creature removal. Had lots of tax effect and then he added a Pyromancer's Swath on top of it. He then won my stalling (for an hour!!!) and playing Test of Endurance. I tryed to counter and remove his stuff but he always had the answer.

I'm still happy with that loss, since I destroyed almost everyone and the most experienced player at the table had to give everything to win.

With solid access to black mana and damage doublers already in play, you could look at Insult/Gonti's Machinations and similar 'damage doubling' synergies for combo kills rather than flat burn. Doublecast, Howl of the Horde Increasing Vengeance Pyromancer Ascension Reverberate Furnace of Rath Pyromancer's Swath Quest for Pure Flame The Flame of Keld are all interesting options.

It would work well alongside some light accelleration with Pentad Prism, Grinning Ignus, Simian Spirit Guide and mana rocks to reliably hit that 5+ mana you need.

That said, the biggest thing is making sure you have things to side in for those deflecting palms. There are a subset of decks that just don't care about it, and you need to be able to fight them. The second thing is that you need to pack something to deal with leyline, as you litreally can't fight through it except by landing your combo. White has enchantment removal- consider it for sideboard.