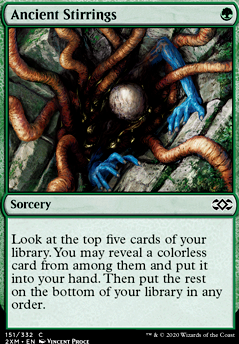 Description in progress below.

What does this deck do?

This deck is essentially the pauper equivalent of modern tron. Sure, there is no Karn Liberated or Ugin, but Maelstrom Colossus is pretty good right? All jokes aside, this deck tries to turbo out tron. The mulligans are extremely aggressive. I have mulliganed to 3 multiple times and have actually won about half of those games. (getting Fangren Marauder against affinity is insane).

The main reason I wanted to play this version of tron over the popular flicker tron is that flicker tron sucks to play and play against. Often you can just time out flicker tron on mtgo, and the skipping combat loop is just boring.

This is arguably the best card in the deck. It can fetch any tron land that you need, at instant speed. It is also the reason for the cards: Haunted Fengraf, Khalni Garden, and Sejiri Steppe. Garden protects against edict effects, Steppe against kill spells, and Fengraf to get a creature back from the yard. Before Expidition Map was banned, this deck had an easier time finding tron than modern tron did, because of this card.

This one is pretty simple, great way to get a tron land or a creature/artifact.

This seems like a weird inclusion at first, as I have no Dinosaurs, but I see it as copy 5-7 of Ancient Stirrings, though just for the tron lands. Because of the Expidition Map banning, I see this as the best replacement to that card in pauper. See below for why I don't play Annoyed Altisaur.

Fangren is one of the best cards in the deck. The lifegain from Chromatic Star, Chromatic Sphere, and deaths of Feligree Familiar, Self Assemblers, plus sacrificing Tree of Tales to Crop Rotation makes it great. This card is the reason the deck can beat the creature matchups, as well as burn and affinity.

After playing with Aurochs Herd initially, I've found that being able to turn 3 Bonder's Ornament into Assembler is just better. Being colorless makes it much easier to cast. I only run three in the deck, I don't believe that I need 4, if I'm casting all 4 then I'm probably ahead enough to just jam Colossi or a Crusher.

I run 3 of these rather than 4 Ulamog's Crushers, as the cascade trigger makes them much better against control decks than Crusher. Hitting a Fangren Marauder off the cascade trigger is soooooo good. However, most of the time you'll hit a Chromatic Star or another 1 drop. A real star of the deck.

This card helps with the aggro matches, and combined with Fangren Marauder is great.

I still run this as a 1 of as it is sometimes just needed to break through a board stall. I love this card, but not doing anything on entry is just bad against any control decks.

I run this as a 1 of to fetch with Fierce Empath against a pesky flyer. Pretty simple.

No Annoyed Altisaur: This would be a great card in the deck if it was only 1 green mana. 2 green makes it much harder to cast, and guarantees it cannot be cast on turn 3. Perhaps you could get away with one in the deck, but I'd rather be able to cast my Self Assembler than keep an Altisaur in the deck. It does work well with Commune with Dinosaurs however.

Here are all the games I have played with my most updated version of the deck. It shows winrate, what to sideboard, and percentages. Below I will also explain what goes on against average tier matches.

You need to find a Fangren Marauder in this matchup, the more the better. It stops them from comboing off and attacking into it. Be wary of Galvantic Blast however, as blocking and letting them kill it is devastating. Overall a great affinity matchup, 77% win rate.

This is a pretty even matchup, but try to not play too much into their counterspells. Especially with Crop Rotation, as it makes you sacrifice a land as a cost, not on resolution. Fiery Cannonade kills all of their pesky Faeries and Ninjas.

It seems like this deck decides to not have a combo on game 1, which is great for the deck. You need to start pushing pressure on very early, with a Crusher or other big dudes.

Lose game one, then mulligan to your Fiery Cannonades or Weather the Storms. Weather doesn't stop them from winning, but gives you some time to draw Cannonade. Focus much more on doing this than assembling tron. This matchup is hard, but the deck will probably get banned.