Lore Characters Who Need A Card

There's tons of characters in Magic who have never seen a proper card of them. Whether it be major main characters like Urza, or one of the dozens of side characters left on the sidelines.

So my question is: Which underrepresented Magic character would you like a card of? What would it do?

Personally I'd like to see an Urza planeswalker card. The only issue is that it'd either be inaccurate to the lore or completely overpowered. I imagine he'd have a similar mana cost/power level to Ugin, the Spirit Dragon and/or Nicol Bolas, Planeswalker but with artifact-based abilities.

Actually there is an Urza card: Blind Seer, though it would be cool to see him at the height of his power. Who knows, maybe with Dominaria we get an Urza card like maybe he didn't die or something of the like.

Urza technically has a card in Blind Seer, but I wouldn't mind it, especially since we're going back to Dominaria.

I know she already has a few cards, but I really want a W/B zombie Elspeth planeswalker. If we had gone back a few months, I would have said Ramos or the Ur-Dragon though :/

That's kinda what I meant by "proper" card. It's technically Urza, but just barely. Like how we got a Ludevic card in Ludevic, Necro-Alchemist but I don't think any Innistrad fans were satisfied with that underpowered dud for such a prominent character.

Also, yeah SteelSentry, before the Commander spoilers I would've said Taigam. Although I would like to see a Khans timeline Sultai Taigam.

There's these as well. 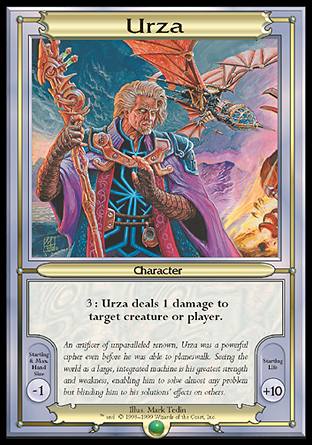 Hal and Alena from the Shadows Over Innistrad block story.

agreed! I'd love to see a Hal and Alena double card like Pia and Kiran Nalaar :)

Im still holding out hope for Serra. I need me my angel commander

abby315 A card like that would be nice! I wonder if they would make them separate cards with partner too, although just one card together seems more likely.

Also, the somewhat long awaited fourth angel sister to Gisela, Bruna, and Sigarda who would be BW.

I'd honestly would like an updated version of Kazuul, Tyrant of the Cliffs or Anowan, the Ruin Sage, especially since we didn't hear much from them in BFZ block.

Gaea has been talked about a lot, but never given a card, nor made an actual appearance in the lore.

I feel like, per my earlier picture, they need to find a reasonable excuse to make usable cards out of all the Vandguard heroes. This would also give us some closer connections to the walkers of the good ol' days.

And hey, we're headed back to Dominaria where Marit Lage is supposedly locked up, thanks to those walkers of old...

CChaos hoo boy he's on the top of my list to, right after Kazuul and Yawgmoth

Especially if he has an ability like Herald of Leshrac which is honestly a hilarious and interesting card.

I think it'd be neat to get 5+ cards representing all the different Taysirs* and different combinations of Taysirs. Have a whole bunch would be super cool. Maybe with some unique Merge-like mechanic?

*Taysir is a planeswalker from Rabiah, the plane which reflected into a thousand copied worlds. Prior to his spark ignited, as a result of this event, he was split into five versions, one for each mana color. It was prophesied that if/when all five of his selves reunited, he'd be the most powerful sorcerer ever known. Over time he did, and in fact was considered the most powerful sorcerer in the multiverse until revisionist continuity retconned Urza to hold the title.

I'd love to see a double legend of michiko konda and her kami sister. Hal and alena would definitely be awesome, and a new card for Toshiro Umezawa after he'd been banned from kamigawa would be great as well. And an appropriate card for o-kagachi would've been cool. The commander version is plain boring.

I guess it's time to finally get a Jace planeswalker, don't you think?

Winterblast, I chuckled in spite of myself. I wonder, though, if we won't see a Bolas-scarred Jace on Ixalan who's forgotten how to use his spark? That would be pretty baller.

I can't do a lot to add to what's already been said. Yawgmoth, Urza, Hal/Alena, Serra, the WB sister angel (she'll totally become a thing on the next visit to Innistrad, like fighting Eldrazi with fire), Taigam and Ur-Dragon, a Xathrid legendary. Ajani's brother would be a sweet card. And, less seriously, Fblthp, He Who Used A Map would be a marquee card for sure. And don't forget Storm Crow.

I think, in most instances, it's not which characters I want to see for the first time, but which characters I'd like to see again. For example, I think some of the Kamigawa characters like Toshiro Umezawa would be fun to revisit, or legendaries from core sets and/or old Dominaria like Talrand, Sky Summoner. Another Talrand would be sweet. Other blocks like Shadowmoor/Llorwyn could use a revisit, too.

I know barrin has a card but I would like to see him as a Planeswalker. I think he would be w/u. Then make one for after Hannah dies so u/b.

I will second the Raven Man. Though I have a strong feeling we will see him at some point.

Another character I really liked in the story of Kaladesh was Vatti or Shadowblayde. Her description reads:

"A talented young elven lifecrafter, one of the city-dwelling Vahadar elves. Dare-all and adventurer. Member of the renegades. A prodigy whose mechanical insects can snare and dismantle the Consulate's surveillance thopters. Shadowblayde was part of the Renegades' on the Consulate's Spire."

I think she would make for a really cool legendary that was green or green black and produced Insect Artifact Tokens in some capacity.

Zaueski Mitul, right? Radhmi's friend and assistant. I would agree!

Also a word on Serra.

If we get a Serra card as a commander it will have to be a planeswalker commander. She wasn't an angel herself if I am remembering correctly, rather a walker that created a realm of angels.

Not that an angel focused walker would be out of the question. In fact something like

+1 put two 2/2 angel tokens with flying into play/-2 Exile target creature. You gain life equal to its toughness/-8 you get an emblem with creatures you control get +2/+2 and gain vigilance and lifelink.

For Urza how about a severed head version? I could see it being a piece of Legendary Equipment. Aside from being able to fetch the Legacy Weapon I have no clue what abilities it would have.

vbfabled now I am convinced we'll see Urza in the upcoming Un-set. Maybe an ultimate or death trigger that requires you to tear the card in two and drop it onto the battlefield. With the top half exiling any permanent it touches and the bottom half giving the controller an Ick counter.

Speaking of the Urza Block another character I thought should have had a card was Belbe.

She was depicted on a lot of cards and played a significant role in the story. I always liked her story too.

Honestly with returning to Dominaria any information on what happened to the Umezawa family after Tetsuo kicked Bolas out of the Japanese themed country would be nice.

Honestly Chiannul was mentioned a lot in Khans block and we never got a card for her. And I always want a Shaman legendary.

I'd personally like to see an Ashnod card, it would probably have an Ashnod's Altar or an Ashnod's Transmogrant ability.

Did somebody say Shaman Tribal?

There's some random shaman that comes up in multiple cards over the course of Khans block. That's the kinda thing I'm looking for. Also, enemy colored dragonlords. They haven't been mentioned and probably don't exist, but one can dream, right?

I would only except Fblthp if he was broken af, 'cause anything else is a letdown. I want it to happen, but I think Wizards would nerf/ban it. Same with Oglor. (See Stitcher's Apprentice)