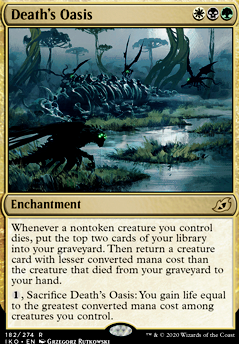 Whenever a nontoken creature you control dies (is put into the graveyard from the battlefield), put the top two cards of your library into your graveyard. Then return a creature card with lesser converted mana cost than the creature that died from your graveyard to your hand.

Guide + Lark + Altar of Dementia is infinite sacs of Guide/Lark which can be infinite self-mill or infinite opponent mill as the win condition. With self-mill can reanimate all other creatures in your library who Lark can reanimate until you reanimate Cutthroat/Celebrant. This combo is also infinite ETB triggers of creatures who have an ETB ability. If you want to cut the infinite combos from your deck then cut Guide.

These are not easy combos for a beginner to understand. My advice to is simplify by expanding on self-mill to utilize Karador's ability to cast a creature card from your graveyard. This is the causal aspect of Karador that's easy to understand. Creature reanimation is a good/easy to understand strategy with self-mill.

Even on a budget the manabase could be improved.

The best part is the are so worried about being prepared for the sharks they don't even think that there could be Ultimatums coming.

So besides breaking the Dryad, Typhoon, and Titans' Nest, I'm working on trying to figure out how to break Death's Oasis.

A pale light in the darkness

Thanks for the comments, Deadpoo111. Yeah, I didn't realize how powerful Tayam can get. Even if you aren't comboing, his/her ability still provides pretty insane card advantage.

Demonic Tutor (and Vampiric Tutor/Entomb) haven't been included simply because I don't have any spare ones laying around. I'd definitely include them if I could.

I had already considered Young Wolf in place of Safehold Elite, but I opted to exclude it for a couple reasons. 1) Even though I am trying to combo, I don't want too many do nothing/dead draws if I can help it. 2) Safehold Elite has persist, which can be used with multiple combos in this deck where as undying is more limited in what it can be used with.

Death's Oasis is interesting. I'll give it a look.

A pale light in the darkness

Wow this deck seems really strong! I didn't really think Tayam was that interesting but he does have some sweet lines. In terms of suggestions, I think you could include a Demonic Tutor, I mean consistency in a deck like this is really good to have. Surprised you aren't running Death's Oasis, the card seems nuts in a deck like this. I also think you could make a slot for Young Wolf it's only one mana for an undying effect so that's just really nice to have. Those are the suggestions I have, cool idea +1